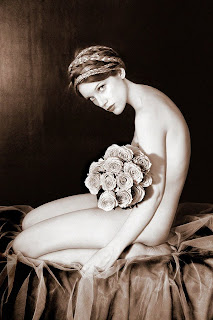 And now onto one of my favorite, but impossible-to-use names: Eurydice.

You already know of most of Eurydice's story from the profile of Orpheus. She is either an oak nymph or a daughter of Apollo. There is not as much information available on Eurydice as there is on her husband. It's not known if the character in the myth is based on a real person. However, there are many people from history with the name Eurydice. Mostly ancient queens of Greece and Egypt. Eurydice derives from the Ancient Greek eurudike, meaning "she whose justice spreads widely." There are other Eurydice's in Greek mythology as well, but they all have bit parts. This makes me think that it was a popular name in Ancient Greece.

There is an interesting interpretation of her story that I think deserves to be mentioned. A few years ago I saw the Tony-winning play Metamorphosis by Mary Zimmerman, which presented a variation of the Orpheus and Eurydice story. It's a piece that was originally written by Rainer Maria Rilke which was inserted into the drama. It shows the walk out of the underworld from Eurydice's point of view:

Eurydice:
She was deep within herself, like a woman heavy
with child, and did not see the man in front
or the path ascending steeply into life.
Deep within herself. Being dead
filled her beyond fulfillment. Like a fruit
suffused with its own mystery and sweetness,
she was filled with her vast death, which was so new,
she could not understand that it had happened...

Narrator Two:
And when, abruptly,
the god put out his hand to stop her, saying,
with sorrow in his voice:

Hermes:
He has turned around--

Narrator Two:
She could not understand, and softly answered,

Eurydice has a strong hold on culture today, with plays, poems, and songs written about her story. She is also associated with the elm tree, one of the sacred trees associated with Witchcraft. After his failed return from the underworld, Orpheus sang to Eurydice, and the first elm grove sprang into existence where he played.

I should probably explain why I find this name impossible to use (for me, anyway). I think I've butchered the pronunciation of this name at least eighty million times in my lifetime. The amount of times I've seen and heard it have not made the slightest bit of difference. It looks like "YUR-ih-dice" but is actually pronounced "yur-RID-ih-see." Anyone with this name will probably feel like Hermione from the Harry Potter books. When I finally have a daughter I want her name to be something I can actually say.

But hey, if you can pronounce it, use it. Because it's beautiful. And don't let anyone stop you if you're heart is set on it. Not even me.