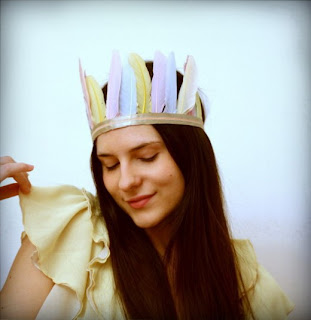 We're going to take a break from the recent overload of Latin and Greek names, and profile something completely different. A lot of people with Native American heritage are attracted to Wicca because the ideals are similar to their traditional beliefs. So it would be foolish not to include some Native American names.

When most people hear the name Pocahontas, they might think of the fanciful story about her presented in the Disney film. They might know only vaguely the historical version behind it. As is to be expected from Disney, this movie has almost nothing to do with the real person.

Pocahontas (pronounced "poh-kah-HAHN-tus") was indeed a princess, and was the beloved daughter of Chief Powhatan. She belonged to the Algonquian tribe which lived in Virginia. There was no chance that she would ever become the ruler because power was passed on through the women and it was her fathers side of the family that was royal. She is described as being a playful, lively, and flirtatious girl.

The first meeting between the around ten-year-old Pocahontas and Captain John Smith is legendary. John Smith believed that Pocahontas saved him from death at the hands of her tribe members. He most likely misinterpreted what was happening. This mock "execution and salvation" was a traditional Native American rite of initiation. Pocahontas wasn't doing anything heroic, she was just performing her part in the ritual. Whatever really happened, John Smith and Pocahontas became friends. However, nothing in historical records suggest that they had a romantic relationship.

Pocahontas is also known for her compassion for the English settlers. She was a frequent visitor to Jamestown, bringing food to trade for other goods. But when hostility worsened between the settlers and the tribesmen, her visits became less frequent. During this time she was married at the age of fifteen to a man named Kocoum (he was depicted in the Disney movie too). What happened with that marriage isn't documented. It is thought that any information regarding her first marriage, and any possible children from it, were destroyed for propaganda reasons.

Her second marriage was to an English tobacco farmer named John Rolfe. She met and fell in love with him while she was kidnapped and in English captivity. John Rolfe was a Christian man who agonized at the thought of marrying a "heathen." So Pocahontas was baptized and given the Christian name Rebecca. No one knows how she felt about her conversion. And no one knows if she was technically still married to Kocoum at the time.

Pocahontas, along with her husband and their son Thomas, set sail to England. Their trip was for publicity purposes, so that the Virginia Company would get more financial support. Pocahontas became a celebrity in London, and was presented to high society and royalty. After seven months, the family decided to sail back home. But Pocahontas would not survive the voyage back. She died from what might have been either pneumonia or tuberculosis. Her body was brought back to England where it was buried. She was only 22 years old.

I've never met anyone named Pocahontas. Pocahontas wasn't even named Pocahontas. That was a nickname meaning "little wanton," "spoiled child," or "little playful one" depending on who you ask. When she was born her name was Amonute, and as she grew up her name was changed to Matoaka. Matoaka means "bright stream between the hills." In her native religion there was the idea that anyone who knew someone's true name could cast spells to harm that person. So the tribe only gave the Englishmen her nickname Pocahontas in order to protect her.

Pocahontas is a positive namesake associated with playfulness, caring, and (although historically inaccurate) romance. It'll show a sense of fun on the part of the namer. However, the memory of the first Pocahontas is hard to detach from. A lot of people couldn't imagine naming their child Pocahontas because of it. But it might not matter to someone who really admires her. One could also use any of her real names to honor her more subtly. No matter what, whoever has this name will have a great woman to look up to.

A bewitching name sighting! At work I came across Yule! On a woman. Hmm.

Also, Bewitching Names was mentioned over at Appellation Mountain. Thank you, Abby!