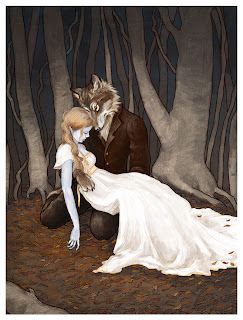 Once in a while I see someone saying how weird and out-there this name is, and I catch myself thinking, "Really? You mean, you don't see this name at least ten times every day?" Then I remember that not everyone spends time reading Pagan books and Wiccan websites on a regular basis. In the Neo-Pagan world, Wolf is in the same league as Raven. It's a very popular magickal name.

Wolf is derived from the Old German name Wolfe which means, oddly enough, "wolf." In researching the cultural impact of these creatures, I found that wolves have kind of a mixed reputation:

-The wolf Fenrir from Norse mythology is the son of the god Loki.
-The Japanese called wolves Ookami, or "great god." Grain farmers prayed to these animals to protect their crops from boars and deer.
-In Greek and Roman mythology, these creatures are associated with the sun god Apollo.
-The founders of Rome, Romulus and Remus, were raised by a wolf.
-In Turkish mythology, wolves were believed to be the ancestors of mankind.
-Navajo Indians believed that wolves were witches in disguise. In fact, the Navajo word for "witch," mai-cob, is the same as "wolf."
-In Pawnee Indian mythology, the wolf is the first creature to experience death.
-Wolves are referenced in the bible as symbols of destructiveness and greed.
-The German fairy tale Little Red Riding Hood, although interpreted in many ways, is thought to be based on the genuine terror of wolf attacks shared by peasants.
-And then, of course, there's the trendy association. Books and movies about werewolves are currently very big, particularly ones directed to teens.

Obviously there's a lot of fear and awe surrounding these canines. This fear persists even though wolves survive in much smaller numbers today and don't like to bother people much (their livestock is another story). Many people who study these creatures will say that these creatures have a more blood-thirsty reputation than they deserve. With the exception of hunting to eat, wolves avoid violence. In the wild, wolves live in nuclear families made up of a mated pair and their cubs. It's most likely us observing this behavior that gave them their "teacher" association. A lot of sources regarding animal totems will state that the wolf represents learning and intuition.

There are quite a lot of wolf names from different cultures. There's the Old German Wolfe, but it could also be a shortened version of Wolfgang and Wolfram (which means "wolf-raven," if you want the best of both names). There's also a lot of older wolf names that are more often seen as surnames: Lupellus, Lupus, Lupin, Lowell, and Lovett. Well, some of these last few are a little problematic. One sounds like a disease and one has a big Harry Potter connection.

I read a comment that said that Wolf wouldn't work on a shy boy. But oddly enough, that's exactly who I picture wearing the name. The quiet leader type. Maybe a little rebellious, but at the same time someone that has a strong sense of justice. It's a name that has a very Native American feel to it to me. But I've heard other's say that the name is too violent. It seems like the wolves in the Pagan imagination and the Christian imagination both have a hold on this name. That shouldn't scare anyone away from it, just be aware. Once the more honorable symbolism of the wolf is explained, naysayers should warm up to the human Wolf in your life.

Image Credit:
http://bluefooted.deviantart.com/
Posted by Isadora Vega at 1:03 AM