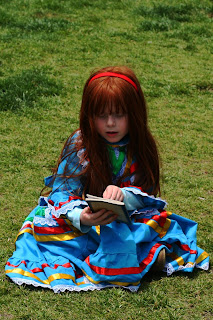 Early this year I finally saw The Secret of Kells for the first time. It's an animated film from Ireland that was nominated for an Oscar last year. It's very good, I highly recommend it. Anyways, the story is about a boy named Branden who lives in an abbey in 9th century Ireland. Against his uncle's wishes, he helps Brother Aiden make the Book of Kells. For the first time in his life he sneaks out of the abbey and into the woods in order to find berries to make ink. While there, he meets a fairy-like character who guides him through her forest. The little sprite's name is Aisling.

Aisling (pronounced "ASH-ling") is an Irish Gaelic name meaning "dream" or "vision." I've also seen it spelled Ashling, which has a more obvious pronunciation. This name has a large influence on Irish culture. I've found it used as the name of a magazine and the name of a traditional Irish music band, among other things.

This is also the name of a particular genre of political poetry that was developed in 17th and 18th century Ireland. In an aisling, Ireland is personified as a woman, either young and beautiful or old and wise. This woman laments the hardships of the Irish people and predicts their triumph in the future.

Aisling as a given name is a relatively new invention. It was not used in Medieval Ireland. This changed in the 1900s. Stimulated by the popularity of Irish writers like William Butler Yeats, Lady Gregory, and Lord Dunsany, the Irish Celtic Revival influenced a variety of art movements and trends in many countries in Europe. One of these trends was introduction more Irish names, and hence little Aislings started gracing the playgrounds.

A quick google search shows that Aisling is a popular choice as a magickal name. But I'm actually amazed that Aisling isn't more popular in the United States. It's incredibly similar to Ashley. Ashley had it's peak in the 1980s, reaching up to #4. Usually when a name gets that popular, they have a lot of variations and sound alikes that also appear on the charts: Ashleigh, Ashlee, Ashlyn, Ashlie, ect. So why didn't I grow up knowing even one Aisling? Or Ashling, or Aislin? It's kind of baffling to me.

This is a another quintessentially "witchy" name that Neo-Pagans use a lot. However, I think non-Pagans could accept it as well. If you have a strong Irish ancestry, Aisling could be a good pick. But keep in mind that your ancestors might have already left the Emerald Isle before Aisling entered "namehood." It's a lovely name that is very playful, cute without being a burden as the girl grows into a woman. A great choice for a dreamy little girl.