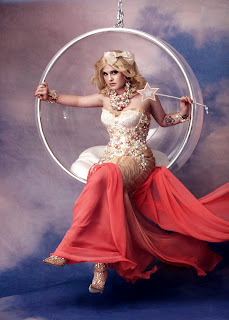 We've done Elphaba, so it was only a matter of time until her sparkly pink comrade graced this website.

Glinda is one of the few "good guy" witches in popular culture. In his literature, L. Frank Baum made a point that he didn't believe that all witches were inherently evil. There are lots of good witches and bad witches in his books, even though the movie only features three. But for some reason, Glinda never registered as being a witch in my mind. I always considered her a fairy.

Well, come on! She flies around in a bubble, wears a puffy pink ballgown with big puffy sleeves (or are those supposed to be wings?), and carries a childish looking wand. Even though she's a redhead in the books and the movie, many people think of her as a blond. Including me. I thought she was thoroughly undeserving of the awesome title of Witch. Growing up, I was weirdly resentful against Glinda. I always sided with the outcasts. Why couldn't the green one win?

This is one reason why I love the novel Wicked by Gregory Maguire as well as the musical adaptation. In these stories Glinda was changed into...well, what I always suspected she was all along. The popular girl. Predictably, Glinda and Elphaba can't stand each other when they first meet, but eventually become great friends and learn from each other. Or at least that's what happens in the play. Glinda doesn't have that big of a part in the book. Read it. She doesn't. Maguire also invented the name Galinda Upland, which is what she's called in the beginning of the book. It isn't until later that she changes her name to Glinda.

To my great surprise, L. Frank Baum did not make this name up. Glinda (pronounced "GLIHN-dah" or "guh-LIN-dah," now you see where Maguire got Galinda from) is a form of Glenda, a Welsh name meaning "fair" or "good." It even enjoyed some modest, fleeting popularity in the United States. Ranking at #968 in the 1950's it was barely there, but it was there.

So would anyone use Glinda as a name today? It does have a positive association, meaning that no muggles are going to ask the, "How could you name you're child after a witch?" question. It also sounds like many "sparkly" words like glimmer, glow, and glitter. But I would be concerned about the name's cuteness. It's very "pink," for lack of a better term. For me, it's in the same league as Tinkerbell or Bambi. Glinda seems to say, "I expect you to be a princess and be interested in being pretty and nothing else." And that's not what I want my name choices to say. It'll be a great name for the right person, but it's just not my style I'm afraid.