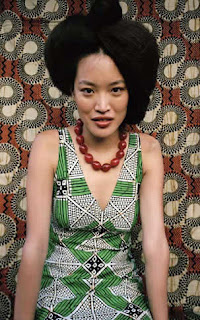 Valentine's Day is almost upon us, and I'm going to have a whole week of lovey-dovey names in a few days to celebrate. But today I'm going to get started with Orchid, arguably the most sensual of flowers.

Orchid (pronounced "OR-kid") is almost solely used as a girls name. Which I find surprising because it's derived from the Greek orkhis, which means "testicle." Scientist gave this name to the plant because of the shape of it's roots, but come on. Look at an orchid sometime. What does that little protrusion in the middle kind of look like? Am I the only one that sees that?

The Chinese mythology surrounding orchids is a bit more noble. For centuries, the flower has been associated with humility, love, beauty, and refinement. This is one of the plants in "The Noble Four" (joining the plum, chrysanthemum, and bamboo). This flower was also beloved by Confucious.

There was a time in which orchids were much harder to find then there were today. In the Victorian era, wealthy people were obsessed with this flower, hiring collectors to travel all over the world to find exotic new varieties. This craze was given the name Orchidelirium, as it was similar to the Tulip Craze in Holland. This fad exists on a smaller level today, there are many orchid fanatics that collect them as a hobby, and theft of more exotic varieties, like the ghost orchid, still occurs.

There are many varieties of orchids all over the world. I was shocked to find that the wild orchids grow pretty much everywhere except for Antarctica. So why are they so hard to take care of indoors? I've never been able to get one to bloom again. Anyways, orchids are primarily cultivated for human enjoyment, but we do use them for other things. Many types of orchids are used as flavoring, in particular one genus known as vanilla. They are also widely used by perfumers. Neo-Pagans sometimes use orchid blossoms in love spells.

You would think that this name would not be problematic. But I did come across one person named Orchid who said that growing up no one knew how to pronounce it. And it's a pretty straight-forward pronunciation, it's only two syllables. I am on the fence about this name gender-wise. I know that many people see this name from the Chinese point of view and therefore find it feminine. But I just can't get over the testicle thing. Orchid feels masculine to me. However, I do love the Spanish version of the name, Orquidea, for a girl. It's not a name with deep roots and it's never been popular, so arguably no matter which gender you choose it should still work. It's just a matter of whether or not the parents are comfortable with naming their son after a flower.