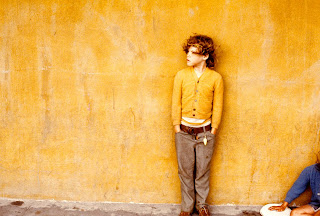 Look how the time flies. It seems like only yesterday that I was profiling Pisces.

The sun sign Aries (pronounced "AIR-eez") lasts from March 21 to April 19. It is the "first" sign of the zodiac, because the Ancient Romans considered the beginning of spring to be the beginning of the year. As you could probably guess, the name is Latin for "ram."

The constellation Aries is extremely old, first recognized in Ancient Babylon. Only at that time it was known as the "Agrarian Worker." Not quite as catchy. They later changed it to a ram possibly due to the influence of the legendary story of Dumizi the Shepard. This shepard is the subject of many Sumerian epic poems.

Anyone who has studied Greek/Roman mythology has at least a passing knowledge of the Golden Fleece. The story goes roughly like this: Phrixus and Helle were children of the mortal Athamas and Nephele, a cloud nymph. When Athamas decided to remarry, his previous wife Ino became wildly jealous and plotted to destroy the entire family. She arranged for their corn seed to be roasted so they would not sprout when planted. When the crops failed, Athamas sent messengers to consult the oracle in Delphi on what to do. But along the way, Ino stopped the messengers and bribed them to say that the oracle suggested to sacrifice Phrixus. In order to protect her children, Nephele sent a winged, golden ram to carry them away. Helle fell and died, but Phrixus arrived safely to a town called Colchis. He quickly became friendly with the King's daughter. Phrixus sacrificed the ram to Zeus, and gave it's golden fleece to his new father-in-law. The King placed it on the branch of an oak tree, where it remained until Jason wanted it. As for the ram, it's form was placed in the stars.

Not everyone sees a ram in this grouping of stars. In Chinese astrology, Aries is a part of a constellation known as The White Tiger of the West. This constellation represents the autumn season.

It's a masculine fire sign ruled by the planet Mars, which is appropriate to the Arien personality. According to astrologers, Ariens are born leaders who are very competitive. Ariens are bold and confident, but also impulsive and hot headed. They have original ideas but no discipline. All very reminiscent of the powerful but flighty energy of fire.

Aries is probably one of the most usable zodiac names. I can see a little boy wearing it with ease. It's very similar to names like Ari and Ariel. I would expect a little Aries to be filled with a rams energy, always the first to dive into projects and new experiences. It'll be worth considering for a child born on the cusp of spring.