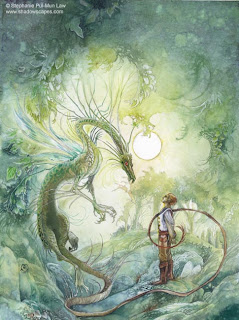 A lot of names were popularized by the Harry Potter series. Draco is one of them.

Draco (pronounced "DRAY-koh") is a Latin name derived from the Greek drakon, meaning "dragon" or "serpent." The Ancient Greeks used Draco as a word to describe both dragons and snakes, so that makes this a very good snake name as well. Dragons are very popular mythical creatures that appear in mythology and literature around the world:

-Travel writers of Ancient Greece wrote about dragons in India and Ethiopia.
-Most European cultures viewed dragons as malevolent creatures. A notable exception is the Red Dragon on the national flag of Wales.
-In most countries in Asia, dragons are seen as benevolent water deities and are usually depicted without wings. They are particularly popular in China where the dragon was used as a symbol for the Emperor.
-The Persians believed that a baby dragon would be born with skin the color of the mother's eyes.
-In J.R.R. Tolkien's The Hobbit, the main villain was a dragon named Smaug.
-Dragons are beloved by children, with more movies and books centered around them than I could list. A recent example is the film How to Train Your Dragon.

There is also a dragon in the night sky called, you guessed it, Draco. Its among the oldest constellations to be defined, appearing in astronomical records under the name Tawaret. Tawaret is the goddess of the Northern Sky in the Egyptian pantheon. It was the Greeks that name the constellation Draco. In Greek mythology Draco represents Ladon, the dragon that Hercules had to slay in order to get to the golden apples of Hesperides. In Roman mythology, the dragon was slayed by Minerva and then tossed into the sky. Christians interpret Draco as the serpent that tempted Adam and Eve.

Draco is a very old name with many namesakes. One of them is an Athenian from the 7th century BC, who was a legislator known for his harshness. The term draconian comes from him. There was other Athenian Dracos in the Hippocrates family line and, as you can guess from the family name, they were all physicians.

But the most famous Draco is Draco Malfoy. Draco is the snooty, rich bully of Hogwarts, who spends a great deal of energy trying to make Harry Potter and his friends miserable. Some people think that this puts the name off limits, but I don't think fictional bad guys and tragic characters leave nearly as big a stain as real ones do. Besides, some Harry Potter fans really like the Sytherins, and Draco is sort of redeemed at the end of the series.

Draco has never appeared in the social security list of popular names in the United States. Variations of Draco include Drake and Drakon. Drake has been climbing the charts since the 1980s, and in 2009 it reached #230 with no signs of stopping. With a popular cousin and a famous fictional namesake, Draco might not be far behind.