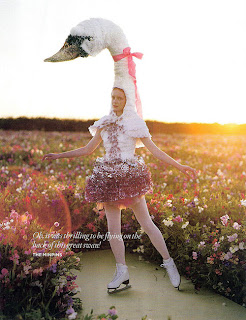 Natalie Portman won best actress for Black Swan, and I couldn't be happier! And even though this name was never mentioned in the movie, I'm still profiling it to celebrate.

In Black Swan the dancers are performing Swan Lake, so let's start with where this famous Tchaikovsky ballet comes from. The origins of the story are a little bit of a mystery. We don't even know who the author of the original libretto was. Historians believe that it creators of the ballet might have cobbled together different fairy tales. The symbol of the swan was chosen because it was seen as quintessentially Russian. The outline of the story is based on The Stolen Veil by German author Johann Karl August Musaus. The Russian folktale "The White Duck" also bears some similarities to the ballet. And the inspiration for Prince Siegfried might have been the real life King of Bavaria, Ludwig II.

Here's a brief overview of the story. Odette is a princess who has been enchanted by the evil Von Rothbart. She is a swan by day and a human by night. She lives by a lake that was made by the tears her mother cried when she was kidnapped. The only thing that can break the spell is eternal love, but if the vow of eternal love is broken she will remain a swan forever. Enter Prince Siegfried, who sees Odette transform. He instantly falls in love and promises to break her spell. He invites her to a ball where he will make her his bride. Von Rothbart hears about this, and devises a plan to disguise his own daughter, Odile, as Odette to get Siegfried to break his vow. Siegfried falls for it. Once he found out what he did, he finds Odette, who now will never be free as long as she lives. The two lovers kill themselves, and are free in heaven.

Odette and Odile. Looking at these two names makes the book-character-creating nerd in me gets all jittery with glee. Because the people behind Black Swan had to have known this. Even though they didn't use them. There's no possible way that they couldn't have. Odette and Odile are the "same" name.

Odette (pronounced "oh-DET") and Odile are both feminine versions of Otto, which is a German name meaning "prosperous" or "wealthy." They join other feminine variants like Odila, Odalys, Otilia, and Ottilie. Odette is French while Odile is German. This is interesting because in the movie, in accordance to the ballet's tradition, the parts of Odette and Odile are played by the same person.

Odette is one of those names that everyone is familiar with but is rarely used. Odile, on the other hand, was on the United States popularity charts. It peaked in the 1900s at #917. But Odette has never appeared. But that doesn't mean that there aren't other namesakes besides the dancing swan. There is actress Odette Juliette-Yustman. And there is the Odette in the goofy Disney-wannabe animated movie The Swan Princess, based on the same story.

Odette's first association will always be the ballet, but that's not necessarily a bad thing. It's a lovely name with graceful connotations. It's really a shocker that there aren't more Odettes on American playgrounds. But some say that French names are making a comeback, so maybe in a few years that will change.