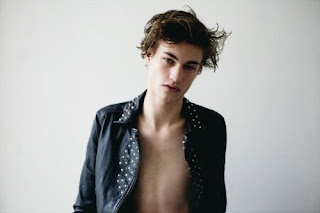 Most fairy tales don't give names to their witchy characters. They're simply called "the Witch" or "the Sorceress." Bensiabel is different in many ways. 1) He's one of the few male Witches, 2) he has a name (well, obviously), and 3) he's a good guy.

Bensiabel (pronounced "ben-see-AH-bel," I think) appears in the supposedly-Italian fairy tale Prunella. The story was first published in The Gray Fairy Book by Andrew Lang. Bensiabel falls in love with the beautiful slave girl that his mother, also a Witch, had kidnapped and imprisoned. This girl's name is, you guessed it, Prunella.

In the story, his mother instructs Prunella to complete a series of impossible tasks on penalty of death. First, she instructs her to collect some water from a well, but gave her a shoddy basket to do it. While Prunella cries, Bensiabel first comes to her and asks if she would kiss him if he filled her basket. Prunella says no, because he's the son of a Witch. Bensiabel fills her basket anyways.

The next task the Witch gives her wheat and tells her that it better be bread by the end of the day. That's an impossible span of time to make bread from scratch. Bensiabel returns again, and asks if she would kiss him if he made the bread for him. Prunella gives him the same answer as before. But he makes the bread anyways.

The Witch then tells Prunella to go retrieve a casket from her sister's house, who is also a Witch. She knows that she will enslave Prunella and starve her to death. While Prunella is walking, Bensiabel meets her and warns her that she will be killed. He says that he'll save her for a kiss. Prunella still refuses. But he still gives her the tools in order to rescue herself, because he "loves her more than life itself."

The Witch is infuriated that Prunella has still managed to stay alive. She tells her that if she is unable to distinguish which of the roosters crowed during the night, she will eat her. Bensiabel meets her in the night. They have the same exchange. Dude is persistent, isn't he? The Witch asks her which rooster crowed and Prunella answers correctly. Just then another one crows and the Witch quizzes her again. She answers correctly again with Bensiabel's prompting. Another one crows and the Witch asks again. But Bensiabel hesitates because he wants her to kiss her finally. But then the Witch lunges for her. Bensiabel breaks into the house and pushes her down the stairs, killing his mother. Prunella finally comes around and the two get married. The end.

Bensiabel's name origin is a mystery. It certainly doesn't seem Italian. Which is curious because Prunella is a recognized Italian name. Perhaps Andrew Lang invented it, thinking that a magical character could not have an ordinary name. But no one really knows for sure.

I really wonder why Bensiabel isn't more widely used. Okay, it's not that popular a fairy tale, but come on. It's a wonderfully romantic character. It has the simple Ben as a nickname. And I guarantee you it's very unique. I guess most people are just not aware it exists. Well, now you know.

Email ThisBlogThis!Share to TwitterShare to FacebookShare to Pinterest
Labels: B, boys names, fairytales and fables