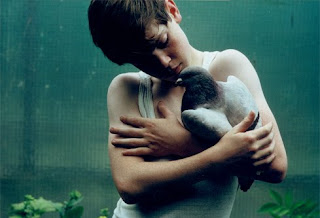 There are many different types of feathered friends that could be inspiration for names, but how about just Bird? There is a Neo-Pagan fictional character with this name, so it's totally plausible.

Birds fill a variety of roles in mythology. Due to their ability to fly, they are associated with supernatural realms that humans cannot visit. They are frequently the messengers of the Gods, or they guide the souls of the dead to the afterlife. Many creation myths feature either birds or eggs. What the bird symbolizes is very specific to the type of bird and the culture, so it would be literally impossible to list every single story here.

The word bird came from the Old English bridd, which was a term originally used only for young birds. The word for an adult bird was fogul. Good thing they changed it, I like bird much better.

The only person named Bird that I've seen is the fictional character in the novel The Fifth Sacred Thing by Starhawk. He is both a musician and a warrior in a post-apocalyptic world. Before the story begins, Bird was captured by the Stewards, an authoritative government that has taken over the United States. At the beginning of the story he finds a way to escape back home to the Utopia where his lover, Madrone, lives. But when he regains his strength, he rejoins the fight against those that would destroy his home.

It's unlikely that you would find Bird in any baby name book. Despite this, Bird and variants of Bird used to be well used in the baby name world. In the girl's column there are lots of variants including Birdie (peaked in the 1880s at #168), Birdella, Birdelle, and Birdee. Bird might have been more well used for girls partially because it was a nickname for Bertha. But both Bird and Byrd were also a surnames which, back then, meant it was masculine as well. I can see this name catching on again for the girls. Boys, I'm not so sure. Today, this name could be potentially problematic in England if you give it to a boy. There, bird is a slang word for a woman, which is something I just know from watching too many interviews of the Harry Potter cast.

I've had a change of heart about Bird. Before I thought it was too vague, whatever that means. Although I'm still not sure if it's something I would use myself, I think it's a great name. For the right family, it'll be charming. It's a lovely name for a person with a free spirit.