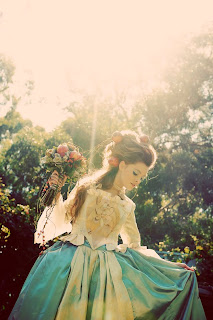 Today is Earth Day, a holiday intended to inspire awareness and appreciation for the environment. As a Wiccan I'm inclined to say, "What's the big deal? I'm a Pagan. Every day is Earth Day." But we are going to profile Eartha all the same.

Eartha (pronounced "ER-thah") is an Old English name with an obvious meaning. The question is, where does the word Earth come from? Unfortunately, it seems like that question is impossible to find an answer for. It could come from the Saxon "ertha," the Dutch "aerde," or the Old German "erda."

Earth is one of the sacred elements in not just Neo-Paganism, but in other religions as well. In Wicca, it's a feminine element associated with stability, prosperity, and strength. Earth was one of the four classical elements in Ancient Greek philosophy, which basically consist of all the Wiccan elements except for Spirit. The Greeks associated Earth with the mortal matters of life and death, a heaviness that keeps the body grounded.

The biggest criticism against this name is that it's very attached to it's most famous namesake, Eartha Kitt. Frankly, I'm baffled as to why that would be a deterrent. Eartha Kitt was one of the classiest, badass woman ever to walk the...well, you know. She was both a singer and a film/television actress who was most famous for having an exotic yet unidentifiable accent. Her heritage is Cherokee and Black on her mother's side and her father was "Dutch or German" (Eartha is the child of rape). Orson Welles cast her as Helen of Troy in his production of the play Doctor Faustus. Eartha starred as Catwoman in the final season of the 1960s Batman television show.

The reason she never got super famous, aside from being a biracial woman in the 1950s and 60s, is because she made a lot of anti-war statements during the Vietnam War. One of her quotes were, "You send the best of this country off to be shot and maimed. No wonder the kids rebel and take pot." Her remarks actually made Mrs. Johnston cry. So I suppose the association would be a problem if you're a fan of President Johnston. Her opinions led her to be ostracized in the United States, so she devoted her energy to performing Europe and Asia, where she is much more well known. She continued to act and sing well into old age, and was also a vocal supporter of same-sex marriages. Since I know there are some young people reading this blog, I'll school you and link to her songs "I Want to Be Evil" and "C'est si bon." She wasn't beautiful in a conventional way, but she's still so gorgeous.

Today, Eartha is a unique name. It was well used by the Puritans in the 1700s, if you can believe it, but has been rare ever since. The only time Eartha ever charted in the United States was in the 1930s at #961.

So if you would like a beautiful name for an Earth Day baby, Eartha is your girl. It's unique but familiar, very soft, and as lovely as it's namesake. I mean the planet, but the late, great Mrs. Kitt works too.