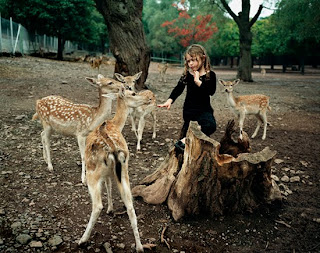 A beautiful, simple option for someone looking for a gentle, sweet name for a spring girl.

Fawn is pronounced the way it looks. Don't try to convince me that it's pronounced "FORN," baby name websites. I do speak the English language. Fawn is an Old French word meaning, you guessed it, "young deer." Deer, and fawns, are animals that play a very important role in mythology all over the world:

-The Celts called them "the cattle of the faeries" and they believed that they were herded and milked by a benevolent fairy giantess.
-In Greek mythology, the deer is associated with Artemis, goddess of the hunt.
-The Hindu goddess of learning, Saraswati, takes the form of a red deer called Rohit. Because of this connection, learned men use dear skin as clothing and mats.
-A golden deer plays an important part in the Ramayana. While in exile in the forest, Sita spots a beautiful golden deer, and asks her husband Rama to capture it. The deer was actually a mythical being in disguise, who lures Rama away from Sita so Ravana can capture her.
-In Jewish mythology, there is a giant stag named Keresh that lives in a mythical forest called Divei Ilai.
-In the Shinto religion of Japan, deer are considered messengers of the gods.
-The deer is important to the Huichol people of Mexico, as it is the "totem animal" of the whole tribe.
-Fawns play a big role in children's literature and movies. Two of the most prominent are the Disney film Bambi, and the book and movie The Yearling.

Fawn is also a color name. It's used to describe a light yellowish brown. The term is usually used in reference to dog coats, but it matches the color of a baby deer perfectly. Fawns also have white spots on their coat for camouflage. When they lye down motionless for hours and sometimes days, these spots look like dappled sunlight hitting the ground.

It looks like Fawn is a name from the hippy era. It first appeared in the 1960s and peaked in the 1970s at #924. Now the name rests just beyond the top 1000. So while it is not super popular, it's unlikely that a person named Fawn will be the only Fawn she ever meets.

Regardless, it's a lovely name. But it might not be for everyone. Some people might be concerned that it's too babyish. It is the name for a baby creature after all. But that might not be a deal breaker for everyone. The name honors the beauty of the animal and lets face it, a girl named Deer just doesn't have the same ring to it.