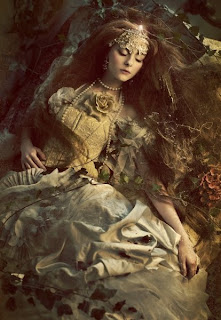 An adorable name from my generation, and a great party member, but it's not without it's challenges.

Tiffany Aching is a character in Terry Pratchett's Discworld. She is a Witch-in-training that grows up during the course of the stories. She begins studying at the age of nine. At that young age, she rescues some people from the Queen of the Elves. For that she earns the respect of Granny Weatherwax. Tiffany has the ability of "first sight," which is the ability to see what is really there as opposed to what one thinks should be there. She also has "second thoughts," which are the thoughts you think about your thoughts.

Tiffany (pronounced "TIF-ah-nee") is derived from the Old French surname Tifaine, which is derived from the Greek name Theophania meaning "manifestation of God." It was a name usually given to children born during the Epiphany. It was well used in the Middle Ages.

The name has recently come to my attention due to a post on another blog listing the "most hated baby names in America." Most of the names on the list are victims of their own mega-popularity (Madison, Aiden, Nevaeh), but Tiffany has not been a hot name since the 1980s, when it peaked at #11. Tiffani and Tiffanie were also popular. It's been dropping since then. So why the prominent dislike?

My guess is because it's connected to avarice. The only reason the name reappeared in today's namescape was because of the fancy jewelry store. Tiffany & Co. was founded by Louis Comfort Tiffany who was more well known for making lamps during his lifetime. The book and film Breakfast at Tiffany's features the store. Therefore, Tiffany falls in the same category as Royce and Diamond, "status symbol" names that are sometimes picked in order to appear upper-class and as a result are anything but. Also, some people are rather insistent that Tiffany is a stripper name, which I find rather silly. What stripper uses her real name?

If your favorite name is Tiffany, don't freak out! The study was not in the least big scientific (then again, I don't think any name studies are the least bit scientific), just a compilation of what people on baby name forums were saying. Tiffany's a lovely name, so if someone expresses their displeasure for it with the above reasons, counter that it's from the Middle Ages and is the name of a cool Witch.