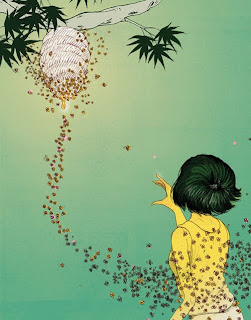 Wendy has requested another name, Devorah, which she says appeared to her in a dream. However, because it's variation Deborah is more well known, I'm kind of profiling both.

Devorah (pronounced "DEHV-rah") is a Hebrew name meaning "bee" or "a swarm of bees." Bees are prominently featured in mythology around the world.

-They are very important for pollination and are generally held in high regard, and beekeeping has been practiced since ancient times.
-In Ancient Egypt, the bee was the symbol of Lower Egypt. In their mythology, bees were created from the tears of the sun god Ra when they hit the hot sand.
-The Ancient Greeks believed that bees bridged the natural world with the underworld, and many early tombs were shaped like beehives.
-Images of the Mayan bee god, Ah-Muzen-Cab, have been found amongst ruins of Mayan cities well known for producing honey. The Mayans considered honey to be the food of the gods.
-Mead, an alcoholic beverage made from honey rather than grapes, was invented by the Cretans and is older than wine. Many Neo-Pagans still enjoy it and it's traditionally served at holidays and handfastings.
-They were commonly used by many political theorists as an example for human civilisation due to their diligence and cooperation.
-Despite all this, mellisophobia is very common (I have a deep phobia of being attacked by a swarm of bees, and I still can't stand the sound of fluttering insect wings, so I can relate).

Debora is the name's most common permutation, and is also the name of a biblical heroine. In the Old Testament, Deborah was a prophetess of Yahweh, the god of the Israelites, and the fourth Judge of pre-monarchic Israel. She was the only female Judge in the history of that country. She is well known for leading a successful counterattack against the Canaanites. "The Song of Deborah" is the earliest example of Hebrew poetry, and is also one of the earliest portrayals of strong women.

Because of this, Deborah has always been a favorite amongst Jewish families. English Christians began to use it after the Protestant Reformation. It also became popular with Puritans. Today, Deborah remains well used. Deborah peaked in the 1950s at #5, so many people you meet with this name should be Grandmas by now. Although it hasn't left the chart since then and is tentatively climbing back up the ranks. It's currently #777.

Devorah, on the other hand, is nowhere to be seen. As far as I can tell it has remained obscure throughout the centuries. I see no reason why not to use Devorah, other than people will constantly confuse it with the well-known Deborah. It's a minor challenge, and it'll be a great way for a Neo-Pagan to honor Jewish heritage as well as the honey producing insect.