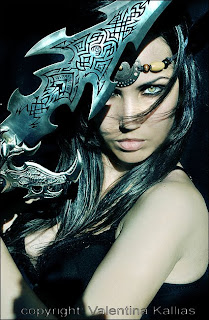 The Harry Potter character Bellatrix Lestrange is responsible for reintroducing this old gem, but it's also it's main obstacle. Parents have been giving this name to their daughters since the books came out, which has stirred up a little bit of a controversy.

Bellatrix Lestrange is the sister of Narcissa Malfoy and the cousin of Sirius Black. Their clan is an elite pure-blooded family, and Bellatrix has contempt for muggles, mudbloods, and blood traitors. She is one of the few known female Death Eaters, and is also one of the most dangerous. After the first Wizarding War, she was given a life sentence in Azkaban for torturing the Longbottoms to the point of insanity. She was married, but had no affection for him whatsoever. She is in love with Voldemort and would do anything for him. In the movies, the actress Helena Bonham Carter portrays her in a deranged way, as if she has some kind of mental disorder. This isn't suggested in the book, she is simply a murderous person who truly believes in Voldemort's world view.

Villains always have the snazzy names, don't they? Bellatrix (pronounced "BEHL-ah-triks") is a Latin name. Bella is both the plural word for bellum meaning "war" as well as meaning "beautiful." Trix is a feminine suffix. Therefore, Bellatrix could mean either "female warrior" or "beautiful woman."

Her name also follows the Black family tradition of celestial names. Bellatrix is the third brightest star in the constellation Orion. This star is also known as the Amazon Star. The Amazons were a legendary tribe of female warriors who removed one of their breasts in order to draw their bows better.

I can see the appeal of this name. It really is beautiful. It's many potential nicknames are lovely: the currently popular Bella, Belle, Trixie, or Ella. However, since the character is the only notable namesake, it's not something that I would use. If we are to read the Harry Potter books as a warning against bigotry, then the Death Eaters are kind of like the Nazis of the story. Which would make Bellatrix the Joseph Goebbels of the Harry Potter world. That association is enough to put me off it.

However, it certainly wouldn't bother me one bit if I met a little baby Bellatrix. It is certainly not as controversial a name as Pink or Jezebel, and neither of those names offend me either. Perhaps the association is too new to cause a significant cultural aversion to it. Either way, if you have a daughter named Bellatrix, I wouldn't worry too too much about a negative reaction.