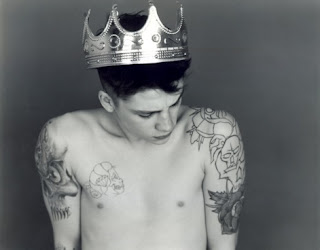 Some may argue that this name has too much in common with our animal friends, but that hasn't stopped some people.

Rex (pronounced REKS) is a Latin name and it means "king." This was, of course, only used as a title in Ancient Rome and wasn't used as a given name until the 1800s. Rex is also commonly seen on British coins, although since it's been a while since England's had a king these coins might be quite old.
Rex brings to mind two animals. One is the reason why some would stay away from this name: dogs. Rex, along with Fido and Spot, is a common name to give a dog, or at least it used to be. Rex was the name of a sheepdog in the film Babe. In the realm of comic books there is Rex the Wonder Dog. There is also an Austrian TV show called Inspector Rex, which stars a police dog. I myself had a beloved stuffed pooch named Rex, so that will always be my first association.
The other animal it could be referencing is the tyrannosaurus rex. It's name means "tyrant lizard king," and no other dinosaur has captured the public's imagination quite like it. Everyone knows it's full scientific name. As a result, Rex has been used as a not-particularly-creative name for fictional dinosaurs including the one placed in New York city in We're Back and the plastic one in Toy Story.
In animal breeding, "rex" is a term usually used to indicate something special about their fur. For example, in domestic cats there's the Cornish Rex and the Devon Rex, known for their unusual curly hair. In rabbits, "rex" indicates an especially plush coat.
If you prefer namesakes of the human variety, there are plenty of those too. Rex Harrison was a British actor well known for his roles as Henry Higgins in My Fair Lady and Julius Caesar in Cleopatra. There are also many, many other namesakes in sports, entertainment, and politics. Rex is also used as a surname.
Despite some people's distaste for this name, it has never left the top 1,000 in America. It peaked in the 1950s at #198, and now hangs out at #707. As far as I know it's not currently charting in Britain or Australia, but it has been used in the past in both countries.
Rex is a no-nickname, no-nonsense name that sounds very dignified. It also could sound slightly dangerous and intimidating. So depending on whether or not animal associations bother you, and when has that ever bothered Neo-Pagans, Rex could be a wonderful Wicca-lite name.
Sources:
http://www.thinkbabynames.com/meaning/1/Rex
http://www.babynamewizard.com/namipedia/boy/rex
http://en.wikipedia.org/wiki/Rex
http://en.wikipedia.org/wiki/Tyrannosaurus
Image Credit:
http://weheartit.com
Posted by Isadora Vega at 12:06 PM