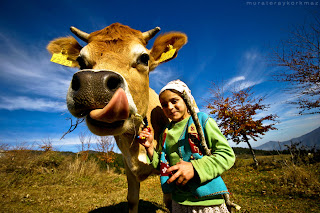 Here's an unused option from Ancient Egypt that has an appealing, familiar sound.

Hathor (pronounced "HAHTH-awr") is the Greek form of Het-Heru, meaning "the house of Horus." One of the goddess' oldest names is Mehturt, meaning "great flood." This was because she was directly associated with the Milky Way, which was known as the Nile of the sky back then. Due to this, Hathor presided over the inundation of the Nile.

This deity's origins are difficult to trace because her worship predates recorded Ancient Egyptian history. In the earliest icons she is depicted as a cow goddess wearing a sun disk crown and a necklace. Later, she was rendered as a human with a cow's head, or as a normal looking woman. Have you ever seen the Neo-Pagan statues of a faceless woman with her arms raised up in a circle? That's Harthor too. Hathor presided over love, music, motherhood, childbirth, dance, and beauty. One of the most popular goddesses in Ancient Egypt she was beloved by poor and royalty alike. It was believed that she welcomed the dead in the next life.

Some readers may be thinking, "Wait. I thought Isis did all that. What gives?" In fact, Hathor was sometimes merged with Isis, even though the two goddesses developed separately. In fact, some texts even list her as the mother of Rah. This was not seen as a paradox. The Ancient Egyptians believed that gods had the power to merge with each other because reality is multi-layered.

According to one myth, Hathor is not to be trifled with. In this tale, Rah, the ruler of Upper Egypt, was no longer respected by the people of Lower Egypt. He used magick to communicate with Hathor's third eye. He told her that some of his people were planning to assassinate him. Hathor became so furious that she merged with Sekhmet, the goddess of war, and slaughtered the offending citizens and drank their blood. Apparently Rah thought she got a little carried away, because he poured blood-colored beer on the ground to fool her. Sekhmet drank the beer and became drunk, transforming back into the gentle Hathor.

I suppose some westerners don't think that "cow goddess" is a flattering association. But why not use it? Isis seems to be doing pretty well on the charts. A Hathor could hang out with Harper, Arthur, and Hawthorn. And it seems appropriate for a girl born during the fertile times of the year.