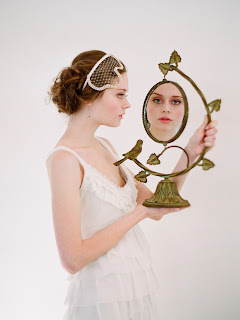 You don't see the macabre aspects of this name, do you? Allow me to help.

Kagami is a Japanese name meaning, "mirror." And not just any mirror. A special type of round copper mirror that had some sort of religious significance to the Japanese that has long since been forgotten. This is the name of two towns in Japan. Kagami mochi, meaning, "mirror rice cake," is a traditional decoration for the Japanese New Year. It's also a surname there.

I don't know how many of you watch The Haunting on Animal Planet. It's another reality show about hauntings that's only vaguely about animals. Those shows are terrible PR for Neo-Pagans, but I still find them fascinating. Anyway, there's this one episode were this family moved into an old house in New Orleans. The previous owners were obviously Occultists. There was a large mural of people having an orgy painted in an Ancient Egyptian style with charms on it (one of the new owners painted nasty slurs all over it because he's an idiot). Another odd detail of the house was that all of the mirrors were either covered with sheets or painted over so it couldn't reflect. Eventually, they find out that this was their was of summoning and trapping spirits in the house.

That's not a common way for Neo-Pagans to use mirrors. Mirrors have many applications in traditional Witchcraft, but it's usually for scrying or divination. Apparently, it's an old custom in the Southern United States to cover all the mirrors in the house when a wake is being held there because they believed that the soul of the dead person would become trapped in the house if they didn't. This is still practiced in countries like Romania, and extends to any reflective surface like a television.

There are lots of superstitions surrounding mirrors. For example, if you break a mirror you receive seven years of bad luck. Mirrors were believed to reflect part of the soul, and that the soul regenerated every seven years. To take away the bad luck, you can grind the mirror parts into dust or bury the mirror. There is also the belief that an infant cannot look into a mirror until her first birthday, because the soul is still developing. Mirrors cannot tell a lie, so if you see something reflected in one that isn't there in the real world, it is a bad omen. And also creepy.

Kagami isn't a name most Americans will be familiar with. I tried to find a pronunciation, which was not forthcoming from the bowls of the Internet. I've been saying it like "kah-GAH-mee" but that is most likely not accurate because Japanese pronunciations are sometimes trickier than they look. But I can guarantee that it would sound unconventional to a Westerner's ears. It has an appeal for it's veiled Witchy meaning, and it's great for someone with bold tastes.

Thank you, Anna, for the beyond generous review at Waltzing More Than Matilda! And while I'm on the subject, I got a very kind blurb from Cristina on A Baby Name a Day! I'm so glad to be embraced by other name enthusiasts!