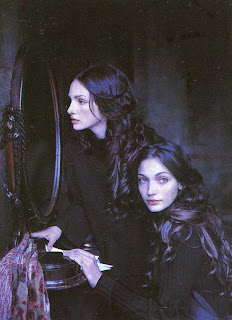 A very appropriate name for any Neo-Pagan, October is an unique option.

October is derived from the Latin word for "eight," because it was the eighth month of the Roman calender. I had to wonder if this name was given, at least in part, in honor of Emperor Octavius (also known as Augustus) but there's no historical evidence that suggests that.

In temperate regions, October is deep into autumn bringing vibrantly colored leaves and berries. Most animals start hibernating during this time and insects are dying by the truckload. Birds start to migrate southward, but alongside them are bats, which is probably why I always see more of them this time of year. Also, the nights are getting longer and longer.

October is arguably the most sacred time of the year for Neo-Pagans in the Northern Hemisphere. We are counting down the days till Samhain, while the people bellow the equator are excited for Beltane. October has long been associated with the dead and the spirit world because of Samhain/Halloween, but we'll save that for the holiday. But it's not all about the supernatural. The German festival of Oktoberfest is celebrated in many parts of the country. In Canada, Thanksgiving is in October, as opposed to the American November Thanksgiving.

October is a very unusual name. Namesakes are few and far between. Dave Eggers, author of novels like A Heartbreaking Work of Staggering Genius and What is the What, has a daughter named October Adelaide. And a character named October appeared in the horror film Stay Alive. There aren't any more that I know of.

As usual for the more daring names, this often gets listed in with the girls. I often picture it more for a boy because I'm unusual like that, apparently. But I love it for both genders. It's a gothic name without being completely unsettling. It's definitely Witchy. Finding a little October on the playground would fill my heart with glee.