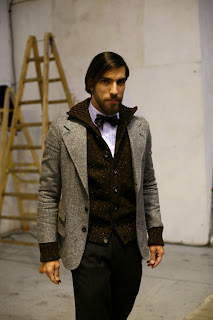 I'll admit that I'm not the biggest horror movie fan. However, I adore both the stage and film versions of Sweeney Todd: The Demon Barber of Fleet Street. Pretty soon, I was weighing the pros and cons of the name Sweeney.

The name by itself isn't menacing at all. Sweeney (pronounced "SWEE-nee") is a Gaelic name derived from Mac Suibhne meaning, "son of Suibhne." Suibhne means "pleasant." It is most often used as a surname. But another explanation exists. In the United States, Sweeney evolved from the French surname Choiniere. Choiniere is derived from choin, meaning "white," which possibly originated as an occupational name for a baker.

But the most well known first name namesake is Sweeney Todd. I don't want to give too much of the story away for those that haven't seen the Stephen Sondheim play or Tim Burton movie. But the basic gist is this. Barber has wife and daughter taken away by judge, barber wants revenge, kills clientele for his neighbor Mrs. Lovett who turns the bodies into meat pies. This was adapted from a simpler melodramatic series first published in 1846. The original Sweeney Todd was not out for revenge, he was simply robbing his clients. He was more one dimensional there than in the musical I fell in love with.

Lots of people have tried to convince the public that Sweeney Todd was a real person. But I'm afraid that there is no historical evidence that proves it. He's one of the first urban legends. But that doesn't mean that there isn't truth in his story. There were recorded instances in which barbers have killed their clients back then. But it's possible that Sweeney Todd is based off of Sawney Beane, a older legendary character. Sawney Beane was the leader of a clan of murderous people living in the wilds of Scotland. They would kill and eat whatever traveler happened to come into contact with them. There's not much evidence that he existed either.

I can understand why this name would be off-limits in England. There, Sweeney Todd is an iconic bogeyman. He's not so iconic in America. He's not completely unknown, either. After West Side Story, Sweeney Todd is the most popular Sondheim musical for high school productions. And the movie did respectably. But if someone met a little boy named Sweeney, would they immediately make the connection to the demon barber? I don't know.

This name also appeals to me because of an underrated movie called Fur. Robert Downey Jr. plays a former side show freak named Lionel Sweeney. But my love for this name is mostly my macabre side showing. I've been toying with it as a middle name, Peregrine Sweeney is quite lovely.

In the first name slot, Sweeney fits into the surname trend. It might even be picked up for girls some day. It does sound like sweetie, doesn't it? How could that be evil?

Image Credit:
http://www.thesartorialist.com/
Posted by Isadora Vega at 12:02 AM