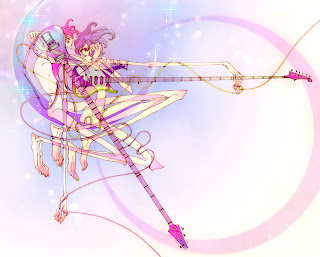 Tori Amos has a new album out called Night of Hunters. This has rekindled an old question that many Neo-Pagans have on their lips: "So is she Pagan or not?"

Tori Amos (born Myra Ellen Amos) grew up the third child of a Reverend of a Methodist church. She was interested in music from a very young age. She won a full scholarship for the Preparatory Division of the Peabody Conservatory of Music, but it was cut and she was asked to leave by the time she was eleven years old. She has mixed European and Cherokee ancestry. Her grandfather offered her pantheistic spiritual guidance and was a great inspiration to her.

Tori Amos was one of the most important female singer-songwriters of the 1990s, and is still respected today. She is well known for songs like "Crucify," "Caught a Lite Sneeze," "1000 Oceans," "Cornflake Girl." Her most commercially successful single is "A Sorta Fairytale." Granted, her later albums have not been as good, but I'm still a devoted Tori fan. She is also well known for being close friends with Neil Gaiman, but contrary to popular belief the Sandman character Delirium is not based off of her.

I would say that Night of Hunters is the best album she's had for a while. All the songs are based on classical compositions and are all acoustic, which is how I like her music. The entire album is also based on the book The White Goddess by Robert Graves, which is about mythology from Ancient Ireland. The White Goddess is one of the most controversial books among Neo-Pagans because of it's questionable historical veracity. She said, "When I read about the power of poets in those days, it took me a while to really comprehend that sort of world, because we don't have a world like that." It is interesting to note that her ten year old daughter Natashya "Tash" Lorien Hawley also sings on this album, and sings with much maturity.

But Pagan references in Tori's work is nothing new. You can find them in "God," "Muhammad My Friend," "Icicle," "Devils and Gods," and The Beekeeper album. But her music also has a complex baroque style that's reminiscent of church music. Apparently when she was a child she used to give new lyrics to church hymns.

She permanently adopted the name Tori because a friend's boyfriend told her that it suited her. The name that she picked for herself could come from two of sources. It is most likely a shortened form of Victoria, meaning "victory." Tori has ascended sheer nickname status and has appeared on the top 1,000 on it's own. It shot up in the 1990s at #202 and now sits at #565. Tori Amos' real debut and rise occurred in the 1990s, but I'm not sure that this rise in popularity can be attributed to her. But this name is also used by our friends in Japan. There, it is a unisex name meaning "bird."

Although she's never aligned herself with any one religion, I'll include her as a well known Pagan here. She's one of us in all the ways that actually matter. And her name should sound right at home with the Maddies of the world. I've heard of Torabelle as a variant, which may appeal to some. But in the meantime, go and listen to her new album. It will remind you of what's so great about her.