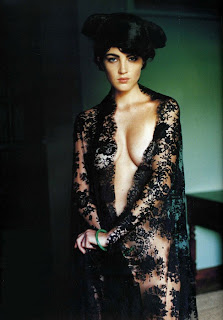 Looking for a spooky name that's elegant and literary? Ulalume might be right up your alley.

This name was invented by Edgar Allan Poe for his poem of the same name. Like many of his other poems like "The Raven" and "Leonore," "Ulalume" is about the loss the narrator feels for a beautiful young deceased woman. Scholars believe that Poe's obsession with this theme is due to the loss of many women in his life. When "Ulalume" was written he had recently lost his wife Virginia.

The poem takes place on a night in the "lonesome October." The narrator roams around aimlessly, following a star in the sky until he unconsciously arrives at the grave of the woman he buried a year ago. Like most Edgar Allan Poe poems, it's constructed to create a feeling of sadness and anguish. Most of the wording suggests death and decay. The star he is following is actually Astarte, a Greek goddess of the evening star and sexuality. Some readers question whether or not Ulalume is meant to be a literal person. She could be a metaphor for death itself.

"Ulalume" isn't as well known as "The Raven," but it did leave a legacy. It's mentioned in Lolita, This Side of Paradise, and A Streetcar Named Desire. But not everyone views the poem favorably. Aldous Huxley likened Poe's style to wearing a diamond ring on every finger.

The name Ulalume might have been created by Poe, but it's possible that it has a basis in the Latin language. Ulalume was most likely coined from ululare, meaning "to howl," or "to shriek." I'm not sure how it's pronounced. We do know that it rhymes with "tomb," so I'm guessing..."oo-lah-LOOM"? Seems like a good bet.

Ulalume is a name perfect for this season. It's filled with darkness and sophistication. You might have to repeatedly explain to everyone how it's pronounced, but if you're looking for something unique, Ulalume's a good option.