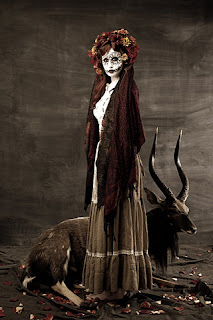 I hope everyone who celebrates it is having a joyous Dia de los Muertos! This Mexican/Santerian holiday is actually part two in a two day celebration. November 1st is Dia de los Inocentes, a day in which people honor the souls of dead children. November 2nd is for the adults, and this is the festival that most people are most familiar with. Aside from sugar skulls, marigolds are the traditional offerings most associated with Dia de los Muertos.

You could probably figure out the meaning of Marigold (pronounced "MAIR-ih-gold") fairly quickly. It's derived from "Mary's gold," referring to the Virgin Mary. Once this name only applied to one flower, the calendula, which kind of looks like a yellow daisy. It was later given to other species, including the one that I most associate with the name, the one with lots of petals similar to a carnation.

The original name for the marigold plant in Mexico is cempasuchil, which comes from the Nahuatl term zempoalxochitl, meaning "twenty flower." This flower had been associated with the dead since the Aztec times, and it is commonly planted in cemeteries. This flower is also widely loved in India and Thailand. Marigold garlands and decorations are used in vast quantities in Indian weddings, festivals, and funerals. An aboriginal tribe in Central India known as the Gonds connected this flower with their patron god Gondmuli. Gondmuli fell in love with the wife of another god and abducted her. He was killed in a battle with the husband shortly after. The wife wept bitterly as she was dragged back by her husband. She dropped her hairpin to the ground and a marigold bloomed where it landed.

Marigolds have been used for many practical purposes. A skin wash made from this flower has been proven to kill bacteria, and it was used by the Cherokee to make yellow dye. Mexicans use this plant to make medicinal tea and perfumes. Marigolds can be planted with certain crops to protect them from pests. And the flower itself is edible.

Marigold's "naminess" started during the flower craze of the Victorian Era, and was given to a smattering of girls. Ever since then, there have been a few namesakes. Winston Churchill had a daughter named Marigold Frances. It was the name of a song by Nirvana. Marigold is a Bollywood movie with a heroine of the same name. And because I'm a comics fanatic I know that it is the name of an insecure but sweet nerdy girl in the webcomic Questionable Content. But overall, this name is pretty association free, except for the flower.

For some reason I expected this to be more popular than it actually is. But it's never charted in the United States. I don't know how many people would think of this as a name for a child born during one of the many festivals of the dead this time of year. But a ghostly past is definitely there. It has that substance, but it doesn't scream it out.