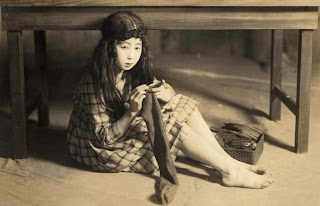 Today I'm profiling a name is something of a mystery.

Most people recognize O-Ren from the film Kill Bill Vol 1. O-Ren Ishii is the half Japanese half Chinese American assassin played by Lucy Liu. As a child, the character watches the murder of her parents and seeks her revenge. Luckily, she got it rather quickly, stabbing the murderer when she was eleven. She made a career out of killing people, received the code name Cottonmouth, and became acquainted with The Bride. That's all back story. Within the course of the movie, The Bride is seeking her revenge by killing O-Ren, among a lot of other people.

Director Quentin Tarantino claims that this name is not made up. In an article that I can't find anymore, he asked around to Japanese people about what they thought of this name, and they said, "Oh yeah. That's a really unusual name. But it's real." The impression that I got was that naming a girl O-Ren in Japan would be akin to naming a girl Dorcas over here in America.

But that doesn't help us figure out what it means. I have yet to find O-Ren in any baby name source. So I can only speculate. Ren is a common Japanese name currently popular for boys. Depending on the kanji used, it could mean "lotus," "love," or "romance." I read somewhere that placing an O in front of a name is an honorific. So..."great romance"? I guess? Maybe someone who knows Japanese could fill me in.

The main challenge here is pure unfamiliarity. People will confuse it with Oren. Oren is a Hebrew and Gaelic boys name with a different pronunciation. It certainly doesn't look like any other girl's name I can think of. And then those that are familiar with it might joke, "She's not going to kill me, is she?"

Despite that, I do really like O-Ren because of how different it is. The movie just gives it an added strength. But what can I say? I'm a sucker for girls with katanas.