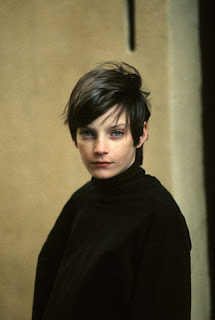 Is it shocking that it took me this long to profile Salem? I'm a little shocked at myself, actually. But it seems like the most obvious Puritan name to start with.

Salem (pronounced "SAY-lem") is a Hebrew name meaning "peace," "whole," or "complete," and is related to Shalom and Solomon. It is also another name for the city of Jerusalem in the Bible. That would make it the perfect name for a overly Christian town like the infamous Salem of Massachusetts.

It's obvious that this name holds great importance for the Neo-Pagan community because of the Salem Witch Trials. It's a textbook case of mass hysteria that Neo-Pagans, and most reasonable people, remember with a shudder. Back then, the inhabitants of Salem Village were forbidden to participate in any course of conduct that was believed to be "devil's work." They not allowed to dance, play with or make toys, play or listen to music that wasn't church hymns, or celebrate holidays. No wonder they went crazy. Part of the reason why the hysteria burned out of control was that it gave people permission to talk about and act out forbidden, but natural, impulses.These trials were actually carried out throughout a few neighboring towns, not just Salem. Over 150 people were imprisoned, with many more accused. 19 people were executed.

Because of this history, Salem's Godly image has been replaced by Witchy cred. Today, Salem, Massachusetts has a large Neo-Pagan population. It is the home of the Salem Witch Museum and the local school is called Witchcraft Heights Elementary School. No matter how much others might want to move away from that image, the only reason Salem is a tourist destination is because of it's Witches. But it is not the only American town that bears this name, Salem is also the capital of Oregon state.

Salem is also attached to a famous black cat. In the comic book series Sabrina the Teenage Witch, Salem Saberhagen is a male witch (they use the incorrect term "warlock") who was transformed into a cat as punishment from the Witches Council for trying to take over the world. But Salem could still talk, an ability which he uses to make sarcastic comments. In some adaptations, Salem is just a regular pet cat. Some people won't like this name because they associate it with pets.

But Salem is also the name of an American hero. Salem Poor was an African American man born into slavery. He managed to buy his own freedom in 1769. It cost a little under $60, which I'm sure was a lot more money back then. He married a free Black woman named Nancy. In 1775, he enlisted in the militia and fought as a Patriot in the Revolutionary War. Unfortunately, not much is known about his post war life.

Traditionally, Salem is a boy's name. However, I've noticed an increasing use for girls because, I assume, it's seen as being Witchy and it falls into today's naming trends. But it has never been a popular name in the United States for either gender.

Salem is a good name for those that either wish to wear their Witchiness on their sleeves or are slightly macabre. It could be a surprising option for a child born during Thanksgiving.