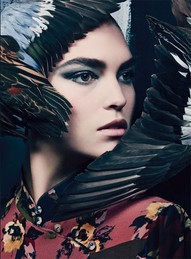 Judging from the way I can't find it in most baby name sources, Alcyone might be a new one for some people. But it's very appropriate for this time of year.

Alcyone (pronounced "al-SEE-eh-nee" or "al-SIY-eh-nee" I think) is a name from Greek mythology. The name pops up twice, it's the name of one of the Pleiades (basically they're stars), and the other one shows up in the myth of Alcyone and her husband Ceyx. According to the story, they were very much in love. Then one day, Ceyx went out to sea and never came back. In some versions of this story, the gods were angry that the couple sacrilegiously referred to each other as "Zeus" and "Hera" and arranged for Ceyx to die, but it most versions it's just a random tragedy. Anyway, Morpheus (god of dreams) disguised himself as Ceyx in order to break the news to Alcyone. Wild in her grief, Alcyone threw herself into the sea. But the gods had compassion, and brought the two back to life in the form of immortal halcyon birds. This is why most sources list this name's meaning as "kingfisher."

The reason Alcyone is associated with Yuletide is due to her nesting habits. Every winter, she nests for two weeks. During that time, the gods make sure that the sea is calm and peaceful so that she can lay her eggs. These seven days on either side of the Winter Solstice are known as "Halcyon Days," but the term could also refer to an idyllic time in the past.

Kingfishers are generally shy birds, so it's surprising that they appear so much in mythology. This might be because, depending on where you live, they have very colorful plumage. They were venerated by the Polynesians who believed that it controlled the ocean waves. The Dusun people of Borneo believed that is was a bad omen, and if warriors see one on the way to battle they should return home.

Most species of kingfishers bear a name relating to either Alcyone and Ceyx, even if it's just their scientific name. They even have their very own opera based on the Greek myth, written by Marin Marais titled Alcyone. The myth is also a favorite subject of poets, including Archibald Lampman and T.S. Eliot.

Alcyone has never been a common name in the United States. It could be a challenge pronunciation-wise, but since it's pretty much spelled the way it's said I think most people will remember it after you explain it. Variants include Halcyon and Halcyone.

Alcyone is a great Witchy name, particularly for those that have an affinity with the ocean, birds, or romantic myths. It's a sweet sounding, calm name for any little girl.