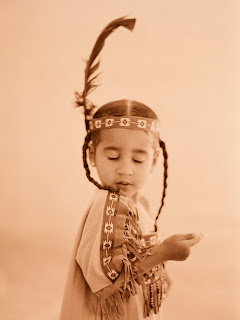 Despite some debate against using this name, Dakota has come to embody the rustic American West.

Dakota (pronounced "dah-KOH-tah") is a Lakota/Sioux word meaning "the allies." My understanding is that Dakota (sometimes spelled Dakotah) is the name of two out of three different ethnic groups within the Sioux tribe. There is the Eastern Dakota (also known as the Santee) and the Western Dakota (also known as the Yankton-Yanktonai). The third group is the Lakota. Lakota comes from the same language and means the same thing.

The earliest recordings state that the Dakotas were originally living at the source of the Mississippi River, but eventually they migrated. The Sioux were well known for dominating the Northern Plains region, mostly in what is now the Dakotas, Minnesoda, Nebraska, Montana, and the Canadian provinces of Manitoba and Saskatchewan. Culturally, they had pretty much all of the trappings of what people think about when they think of Native Americans. They had tepees, feathers in their hair, and horses. They are featured in films like Dances With Wolves and Thunderheart.

Their relationship with White men was turbulent, to put it mildly. By the late 1700s they were trading fur with the French settlers. Then throughout the 1850s treaty violations and late or unfair annuity payments caused increasing hardship and starvation amongst the Dakota people. The trader's refused to issue them any more credit, and one trader named Andrew Myrick said, "If they're hungry, let them eat grass." This led to the Dakota War of 1862, in which Dakotas attacked and murdered white settlers. 303 Native Americans were found guilty of rape and murder and sentenced to hang in the largest mass execution in United States history. Other conflicts include Red Cloud's War, the Great Sioux War of 1876-77, and most famously the Wounded Knee Massacre.

This name also belongs to two American states: North Dakota and South Dakota. South Dakota is the home of Mount Rushmore. As far as human namesakes go, most people will associate it with young American actress Dakota Fanning, who has recently been overshadowed by her younger sister Elle Fanning (interesting fact, they both go by their middle names).

There is some debate over whether the popularity of this name is appropriate. Most families that use this name are Caucasian, which some Native Americans see as being disrespectful. Clearly their objection applies to all tribe names, but Dakota is the name that is often specifically talked about. That makes sense when you think about that particular tribe's past with White men. However, the name is not controversial enough for people to stop using it. For girls it peaked in 2006 at #191 and is now #287. For boys it peaked in the 1990s at #81 and is now #293. As of 2008 it also ranked #191 for girls and #310 in Canada and, oddly, #400 in Scotland for girls.

Dakota is not exactly my tastes, but I can see the appeal. It points back to a time in which America was wild and untamed terrain. Only the namer can decide whether or not the controversy is enough to avoid it.