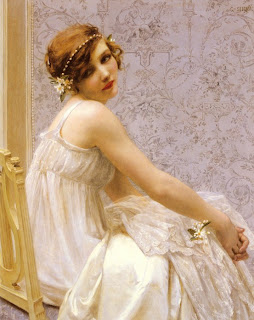 Depending on who you ask Snowdrop could be a charming appellation, or too sugary sweet.

Snowdrop is the name of a small, white flower. Snowdrops are also known by the name galanthus (from the Greek gala, meaning "snow," and anthos, meaning "flower"). They originated in a large area of Europe but like a lot of plants they have been spread throughout the world. However, in some of it's original locations snowdrops are a threatened species, and collecting them from the wild is illegal.

These plants are celebrated as a sign of spring, as they are often the first flower to bloom. In many religions, they are a sign that the gods are returning. They are sometimes called the "Fair Maid of February" or "Candlemas bells," and are associated with Imbolc. In Celtic mythology, this flower symbolizes Brigid. In the Bible, the snowdrop was placed on earth in order to comfort Eve, who was crying for the warmth of Paradise during her first winter. On the other hand, many stories say that snowdrops are unlucky because they often grow in cemeteries. It is particularly unlucky to pick them and bring them into the house on Imbolc or St. Valentine's Day. But there seem to be no repercussions for growing them in the house. Some believe that the snowdrop has many healing properties that modern medicine doesn't know of yet. Research has suggested that it could be used to treat neurological problems like Alzheimer's disease.

I wasn't aware of this, but apparently snowdrops are a big deal. Die-hard galanthrophiles have been known to travel all over the world to find them, attend snowdrop shows, and purchase single bulbs for up to $500. I like flowers and all, but I don't get flower-mania. My mother is a flower addict, and she likes to go to big fancy gardens where pay for admission and spend hours walking through it, and I'm just standing there thinking, "Can't we look at roses for free somewhere else?"

Speaking of mother darling, I have a very old book of fairy tales that used to belong to my mother when she was a child (and is probably even older than that). In this book, there is a story called Snowdrop. Most people would know this story as Snow White. Snow Drop is actually her original name in the Brothers Grimm collection. Apparently, that name wasn't catchy enough. There were two other noticeable differences in the original story: the evil queen is her mother, not her stepmother, and said mother's punishment at the end is a bit extreme. These elements were changed in order to soften the story for children.

Snowdrop is a great magickal name for someone that has a special connection with this time of year. It also sounds like it could be a My Little Pony character. I think it's lovely for someone else's daughter, even if it's not my style.