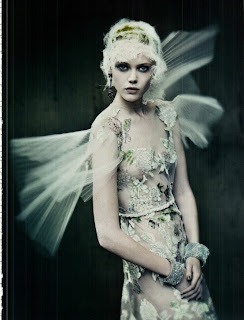 If you are not overly found of names like Murphy or Saoirse, Clover could be a great Saint Patrick's Day name as well.

Clover (pronounced "KLOH-ver") derives from the Old English clafre, which in turn was derived from the Proto-Germanic klaibron, but the meaning has been lost. It's suggested that it could mean "sticky pap" because the sticky juice of the plant was often used to make honey. To "be in clover" means that a person lives luxuriously, because cattle find clovers extremely delicious and also fattening.

Clovers, also known as trefoils, are most often found in temperate habitats in the northern hemisphere, but some species can be found in Africa and South America. They have small red, white, purple, or yellow flowers. Their leaves have three leaflets, hence the name trefoil. Clovers are a popular staple for farmers because they're impervious to mowing, grow on their own, and are nutritious for grazing animals. However, for everyone else it's considered a weed. I know that because I can't recall ever seeing a full grown clover, my father always plucks them out when they're young.

Clovers have long been a symbol of wealth, comfort, and luck. In some Scandinavian countries, it was believed that clovers repelled evil spirits or negative energy. Planting clover around the house or hanging a bundle of it at the front door can help drive these entities away. It can also help a seer develop physic abilities. Clover can be used for smudging the same way that sage is. Shamrocks, the traditional Irish symbol associated with the Holy Trinity and Saint Patrick, are sometimes considered to be young clovers. Clovers occasionally have four leaflets instead of the unusual three, and these varieties are considered to be especially lucky.

In folk medicine, clovers are used as diuretics. Neo-Pagans can brew clover tea in order to help with digestive issues. In some countries, the flowers can be ground up to make a syrupy paste, which is then applied to open sores and athlete's foot. Clovers are edible, and some enjoy adding them into salads. Some varieties taste a bit like lemon. Red clover is particularly healthy, as it is full of potassium and calcium.

Clover entered "naminess" during the Victorian flower craze of the 1800s. Like Lilac and Betony, it didn't really catch on. Clova could be a variant, but it could also be the feminine form of Clovis. This name is often listed as a feminine name. However, perhaps due to other boy's names like Prosper, Archer, or Asher, I think it could work well on a boy as well. Clove could be a charming nickname.

Clover is a charming name. It's rare, but since it sounds like other names that are popular it's not so jarring. I would love to hear a few more Clovers on the playground.