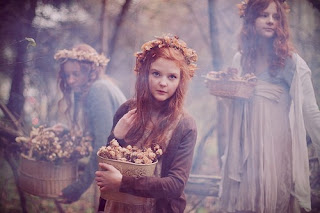 A favorite for name enthusiasts but not actually used much anymore, Ophelia has lots of Witchy cred.

Ophelia (pronounced "oh-FEEL-yah") is a Greek name derived from the word ophelos, meaning "help" or "succor." It was not, however, used during Ancient Greece. It is believed that the name was invented by Jacopo Sannazaro (as Ofelia) for his poem "Arcadia," which is about a man living the big city by retreating to a utopia.

But most people remember this name from Shakespeare. The young noblewoman is the love interest of Hamlet who famously goes mad and drowns herself at the end of the play. Shakespeare plays are rife with Pagan subtext, in Hamlet's case it shows itself in the form of the ghost of the slain king. The only one without any Pagan subtext is, I believe, The Taming of the Shrew. Don't quote me on that, though. I can't find the source where I heard that.

But it doesn't end there. Ofelia is the name of the young heroine from Pan's Labyrinth. Pan's Labyrinth is a dark and bloody fairy tale set in post-Civil War fascist Spain. Ofelia and her pregnant mother go to live in the forest cottage of Ofelia's new step-father, who happens to be an evil captain of the army. Ofelia starts exploring the surrounding woods with the guidance of fairies, and she finds her way into an ancient labyrinth and meets a faun, not the actual god Pan (the original title of the movie is El Laberinto del Fauno, but they didn't think Americans would know what a faun was). The faun tells her that she is the long lost Princess Moanna of the underworld, but in order to make sure that her spirit is intact she must complete three tasks. These tasks are terrifying, but they reflect the terror happening in the conflict between the fascists and the rebels. People interpret the ending of this movie in different ways, so I'm not going to give it away. But it is required watching for Neo-Pagans. I am actually still furious that it did not win best movie in the Academy Awards.

There are other namesakes for Ophelia. There's an Ophelia St. Claire in the novel Uncle Tom's Cabin. Ophelia Frump was in the television series The Addams Family. In the world of hybrid tea roses, this name is given to a type of pink variety. This name was also given to one of the moons of Uranus.

This name was last popular during the 1800s. It was pretty high up there when the top 1,000 baby names were first recorded in the 1880s: it ranked at #260. But it was out of the charts completely by the 1960s. There is quite a bit of resistance to this name today. Many believe that the chances of a boy saying, "Hey Ophelia, can I feel 'ya?" is enough to avoid the name. As stupid as that is, (and if that's really bothering you there's always Ophelie) that's not the worst of it. The feedback I got as a child was that the name was cursed and that everyone called Ophelia would meet an untimely end. I'm a little concerned that they could say that with a straight face. I'll admit that the fictional track record isn't good, but that's just silly.

Ophelia, Ofelia, and Ophelie are some of my personal favorites. I can't decide which one I like best. A juvenile taunt is not enough to make me turn them away, I would be happy to use any one of them on a future daughter.

Image Credit:
Found via http://pinterest.com
Posted by Isadora Vega at 8:34 AM