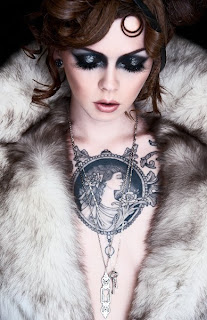 Most name enthusiasts are fans of the mom blog Girls Gone Child, and if you know the children's names it's easy to see why. The mom, Rebecca, has four children with very creative names. Her three daughters have names that she "invented," or if they were used before they were used very rarely. The youngest are girl twins. One of these girls is named Boheme Shalom. I have never heard of that as a name before her. It can be harder to find things to say about the new coinages, but I'll try.

Boheme (pronounced "bow-EHM") is a French word derived from the name of the country of Bohemia. The country is named after the Boii, a Celtic tribe that settled in the area. The Boii originally lived in Northern Italy until the Romans defeated them in battle and they had to retreat. This area they retreated to was recorded as Boihaemum by the Ancient Romans.

There was a time in France when bohemian meant "gypsy," as in a literal Gypsy/Romani person. This came from the (incorrect) belief that they were from the country. It might be true that the Gypsy/Romani people first appeared in Europe by way of Bohemia, but it is generally believed nowadays that they were ultimately from India. As time went on, this word started to be used in a less literal way and was employed to describe an artist or writer. The definition of this word is sometimes written as "a gypsy of society." People who defy conventions in art and life. In the fashion world, the words "bohemian" and "gypsy" are pretty much used interchangeably.

Some people might think of the opera La Boheme when they hear this name. This opera by Giacomo Puccini is basically a tragic love story about starving artists. I actually saw this opera as a girl, although my interest was only due to it being the inspiration for the Broadway musical Rent. I have to admit that I was not overly found of the music, but I loved the acting and the characters.

Boheme got a few raised eyebrows when the name was revealed on Girls Gone Child. Her other daughters, Reverie and Fable, are similar to familiar names Avery and Mabel so perhaps they were easier to swallow. Boheme doesn't have a popular or "established" sound-alike name. Not that I can think of, anyway. The nickname Bo is familiar, but more so on boys.

I love the idea behind Boheme, even though the sound took some getting used too. Someone who uses this name would be someone who has a revolutionary spirit, who likes to live life by their own rules. A description that seems to fit the mother pretty well.