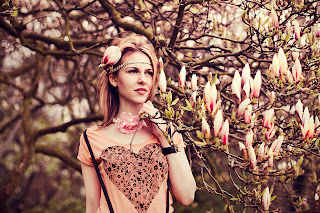 This flower name isn't used all that much anymore, but I wouldn't be surprised if that changed in the future.

Magnolia (pronounced "mahg-NOH-lee-ah") doesn't have much of an interesting meaning. It was coined by botanist Charles Plumier, and it comes from the name of the botanist Pierre Magnol. Pierre Magnol is notable for inventing the current botanical scheme of classification. What he has to do with this flower in particular, I haven't a clue. The obvious follow-up question is, "Where does Magnol come from?" Well, I've hit a dead end there. The other obvious follow-up question is, "What were magnolias called before they were magnolias?" In Martinique, an island in the Caribbean, it was known as talauma.

Magnolias are an ancient flower. Fossilized specimens have been dated at 20 million years ago. They've been around even before bees evolved. They are designed to be pollinated by beetles instead. Magnolias generally grow in warm to areas like East and Southeast Asia; the West Indies; and Central, South, and parts of North America. They do well in some temperate areas, but are not overly abundant there. They come in white, yellow, purple, and pink.

I expected magnolias to show up more in Wiccan herbal sources, but not really. There is some mention of the bark, which has long been used in traditional Chinese medicine as well. Fidelity, love, and hair growth are possible magickal applications. Extract from magnolia bark has been proven to inhibit the growth of bacterial plaque, so dentists are now interested in it.

Historically magnolias have been strongly associated with the Southern United States, particularly Mississippi and Louisiana where it is the state flower. One of the nicknames for Houston, Texas is "The Magnolia City" because quite a lot of them grow there as well. Magnolias are also associated with nobility and perseverance.

Magnolia peaked in the 1900s at #490. It left the charts completely in the 1940s. It might sound dated to some people, particularly to someone who actually knew a Magnolia in that age range. But I doubt that many Americans have met a Magnolia before. For most it could sound like a fresh yet timeless name.

Magnolia is a good name for someone who's looking for a name that's familiar but unique. I would expect a Magnolia to have a "southern belle" personality, charming and proper.