Name Round Up: Famous Witch's Cats 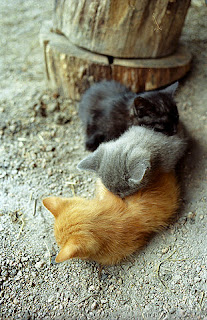 The Witch's world, both in fiction and in real life, is full of cats. They are the traditional familiar, although the tradition is more recent than most people realize. Still, when you think about black cats people instantly think about witches, and books, movies, and other media sources have reinforced that association.

A lot of these cats aren't given names, and usually that's explained away with, "Oh, he's so independent that I don't really own him so it would be ridiculous to give him a name," or something like that. But there are a few monikers to be found. Here are the names of a few well known Witchy felines:

1. Salem. This famous talking cat from the comic books/televisions shows Sabrina: The Teenage Witch is actually a male witch who was transformed into a cat as punishment for attempting to take over the world.

2. Ebony. Ebony is the cat of Agatha Harkness, a Marvel comic book character who appeared in the Fantastic Four series. Ebony is able to transform into a black panther.

3. Pyewocket. Gillian's familiar in Bell, Book, and Candle becomes disgusted with her midway through the movie and leaves her when she starts to fall in love with Shep.

4. Jiji. Jiji is the companion and best friend of Kiki in the Miyazaki film Kiki's Delivery Service.

5. Binx. The talking black cat in Hocus Pocus was actually named Thackery Binx. He was a boy transformed into a cat by the three witches, who called him Binx.

6. Gobbolino. Probably the most obscure name on this list, Gobbolino, The Witch's Cat was a children's book published in 1942. It features a witch's kitten who longs to be a regular farm kitten. Gobbolino is Italian for "little hunchback."

7, 8, 9, & 10. Mystery, Miles, Nee Chee, & Sabbath. Calling popular gothic advertising mascot Emily the Strange a witch might be a bit of a stretch, but with her fondness for black, skulls, and all sorts of macabre things she certainly could be read as one. She is sometimes depicted with her four cats.

11, 12, &13. Ms. Norris, Minerva & Crookshanks. Crookshanks was Hermione's persian, and Ms. Norris was the cat that patrolled Hogwarts. And technically Professor Minerva McGonnagall is her own familiar, she's an animangus that can transform into a tabby. Unlike all of the other cats on this list, none of the Harry Potter cats are black.