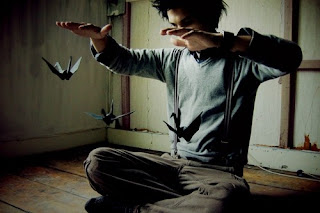 Back when I was researching for the Names of Real Witchlet's post, I found a Rowan Sebastain Aleister. I read that the mother used Aleister in honor of "crazy uncle Al." And when Neo-Pagans say "crazy uncle Al," they mean Aleister Crowley.

Aleister Crowley wasn't a Wiccan, he was an Occultist, Mystic, Magician, Writer, and Mountaineer. And he lived far before Gerald Gardner and his gang started the Neo-Pagan movement as we know it today. But his life and work continue to shape our culture. He is considered to be the most influential Occultist of all time.

Aleister Crowley was born Edward Alexander Crowley in an upper-class English family in 1875. His parents were devout Christians and he was sent off to Christian boarding schools frequently. He was often kicked out for his behavior. Eventually he became disillusioned with Christianity and went against the values of his upbringing. While in college he took on the name Aleister, began to experiment sexually, and read books on alchemy and mysticism.

He officially embraced Pagan culture when he joined the Hermetic Order of the Golden Dawn. But the most important religious experience in his life was in 1904, when he visited Egypt. His wife, Rose, experienced visions while in the country and frequently informed her husband that "they are waiting for you." "They" were Horus and Thoth. Crowley then began to hear voices from what he believed to be his guardian angel, a being named Aiwass. Somehow he received a text called The Book of the Law, and it was from this text that he developed Thelema. Thelema is a philosophy based off of the Ancient Egyptian religion. It was founded on the idea that the beginning of the 20th century marked the Aeon of Horus, a time in which "Do what thou wilt shall be the whole of the Law," was the new ethical code. It encouraged it's followers to look beyond their egos and find out what path in life they are meant to have. Crowley believed himself to be the prophet of the new age.

Crowley was frequently demonized by the mainstream press in his day. But to be fair, he did make that really easy. He was an open pansexual (homosexuality was illegal at the time), engaged in recreational drug use, and openly criticized the social order. He was also racist, anti-Semitic, and sexist. Crowley enjoyed being a sensationalist figure and deliberately provoked the media. He died in 1947, two years before Gerald Gardner gained attention for promoting Wicca. But there are many parts of the Wiccan religion that evolved from Crowley's life and teachings as he and Gardner did know each other. The Wiccan Rede's most important value "an it harm none, do what thou wilt" came from Crowley.

Aleister (pronounced "AL-es-ter") is a variant of Alistair, which is the Gaelic form of the Greek name Alexander. It means "man's defender." It has never been a common name in the United States, but in 2008 Alistair rated #128 in Scotland.

No matter what anyone might think of him as a person, Aleister Crowley continues to be a very important figure in the Neo-Pagan community. Although I'm not certain if I would name anybody after him, I can certainly understand and respect why someone else would.