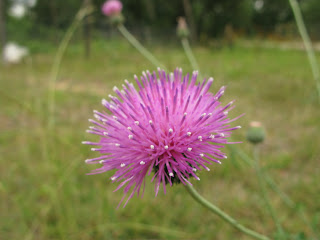 I recently recieved a comment on a name that I profiled almost a year ago: Thistle. It was from a couple that is considering this name for a hypothetical child. The name has a lot of meaning to them. Thistles were used during their wedding, and the Texas thistle is the guy's favorite flower. However, family and friends don't get it. So their question is twofold: a) how do they get people off their backs and accept the idea and b) what middle name combinations can I come up with for Thistle?

Ah, yes. The bane of all name enthusiasts: the family that doesn't understand. It could be worse. You could be dealing with the worst bane of all: the partner that shoots down all of your name suggestions and only contributes names in the complete opposite style of yours, if at all. Looks like you don't have to deal with that.

It is almost never easy to change someones mind with words alone. That's the bad news. The idea that a "weird" name is going to ruin a child's life has been imbedded into our culture for a very long time. Let me do what I do best and make everything about me. I've pretty much been a name enthusiast ever since I was a kid and I learned pretty quickly not to talk about names I like around my family. They're conservative and they have a strict Irish Catholic naming tradition. So I would be in the middle of saying how much I loved Isabella (hey, it wasn't as common twenty years ago) and Dad would chime in with, "You know what's a great name? Thomas! Bet you want to name your son after your beloved father!" Oy.

I could explain how having two people in the family with the same exact name has been a logistical nightmare for my mother. I could tell him that I view Thomas as too Irish Catholic and I want my children's names to reflect my Wiccan beliefs. I could point out that since he did not follow the sacred tradition when he named me that I was under no obligation whatsoever to carry it on with my children. I could remind him that there are already four people with that name in our family and that is quite enough, thank you. And I could admit that I thought that Thomas was just plain boring. And I have. It doesn't change his mind.

But you know what does change people's minds? Actions and experiences. I think you know where I'm going with this. When it comes to naming children, it's much easier to beg for forgiveness than ask for permission. So when the time comes and you're pregnant with little Thistle, do not talk about names at all. Maybe you can let in a few trusted souls, but it'll be like fight club. First rule of name club, you do not talk about name club. Then, when Thistle is born and everyone is gathered around inhaling the intoxicating aroma of tiny human, announce the name.

That is my advice. Since there is not much of a chance that I'll be having children of my own any time soon, take it for what it's worth. Maybe you'll have all boys and the Thistle thing will be a moot point.

Now for the fun part: combinations! Not sure what your style is, although you said that you liked Thistle because it was "whimsical and earthy." I would avoid names that begin with "S" because it kind of turns the name into a tougue twister. My personal instinct would be to put Thistle into the middle spot, but I'm operating under the assumption that Thistle will be the first name. I think I've managed to come up with a healthy variety:

I think that's enough for now. Now lets turn it over to the readers! What combinations would you make for Thistle?

P.S. It appears that my spellcheck is not functioning, so if there are typos you'll have to forgive me.