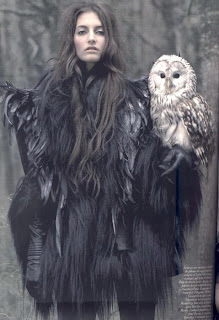 I admit that after profiling September and October I got a little bored with the month names last year. So now I'm going to pick up where I left off with November.

November is derived from the Latin novem, meaning "nine." This stems from the fact that this was the ninth month in the Ancient Roman calendar. At one point in Ancient Rome, the Senate suggested that the name of this month should be changed to Tiberius, in honor of the Emperor of the same name. Clearly, that idea did not catch on. Like September and October, November is a new name option that has a growing number of fans in the name enthusiast community.

November's macabre undertone is less widely acknowledged than October's, but it is there. This month's Old English name was Blotmonag, meaning "blood month." Winters are harsh in Northern Europe and sickly cattle are not likely to survive. So in the olden days the weakest of the herds would be sacrificed to the gods. And then, of course, Samhain, All Saints Day, and Dia De Los Muertos are all on this month as well.

In America, November is considered to be the last autumn month before winter comes. It's the time of the year in which the last of the autumn leaves are falling and the trees are bare. At least, that's what it looks like in the Northern hemisphere. If you're British, you associate this month with Guy Fawkes Day. If you're American, you associate this month with Thanksgiving. Both countries celebrate Remembrance Day and Veterans Day, respectively. It's the same holiday, they just have different names.

November has never been a common name in the United States. But it does have a beautiful sound, even though it's my personal least favorite of the "-ber" months for no logical reason. Nova and Ember could be used as nicknames. Novembris was the Ancient Roman name, and that can be used too.

So if you're looking for a unique autumn name, November could be a great choice.