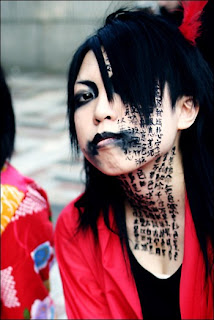 Last year I continued my Hallows theme through November 2nd because of Dia de los Muertos. So here's one more creepy name for the road.

Oiwa (I'm not sure how this is pronounced) is arguably the most famous horror character in all of Japanese culture. She first appeared in a kabuki play called Yotsuya Kaidan in 1825. This time in Japanese history was marked by social unrest and intense subjugation of women. The playwright, Tsuruya Nanboku IV, incorporated shocking murders from the headlines into his play. The audience for Yotsuya Kaidan was the common man, who were seeking increasingly violent forms of entertainment. Which this play delivers. The play was incredibly successful in it's debut, forcing the producers to schedule more performances.

The story is about Oiwa, the faithful and beautiful wife Tamiya Iemon. Oiwa loves her husband very much, but he is bitter about his lack of prospects and wants to get ride of her so he can marry a wealthier woman named Oume (from what I've noticed, this seems to be a common plot point in old Japanese horror stories). Oume worries that she is not as pretty as Oiwa, so Oume's father sends Oiwa some face cream mixed with poison that disfigures her. Her hair falls out and her left eye begins to droop. Iemon is horrified by her looks and asks a friend of his to rape her so that he would have a basis for divorce. This friend of his cannot bring himself to do it and instead shows Oiwa her reflection. She becomes hysterical and kills herself accidentally.

Not long after, Iemon marries Oume. But one his wedding night the horrifying ghost of Oiwa appears and tricks him into murdering Oume and her father. She continues to do this with the rest of Oume's family. Iemon soon descends into madness and is eventually slayed out of compassion and vengeance. There is also a subplot involving Oiwa's prostitute sister Osode, but lets face it. Oiwa steals the show.

In Japanese folklore, Oiwa would be characterized as an onryo, a spirit seeking vengeance. Most are women. They have the power in death that they did not have in life. Oiwa has traits that make her distinct from other onryo. The drooping eye, for one. She also is partially bald and has long, ragged hair. She is wearing the white kimono that is associated with burial. There are many different retellings of this story in stage, movies, and television. Oiwa is iconic, so this appearance is referenced again and again in Japanese storytelling. If you've watched the film The Ring, the girl that crawls out of the T.V. is a direct reference to Oiwa.

Yotsuya Kaidan is the Macbeth of the kabuki world. There have been many reports of strange accidents and injuries happening to the actors who have performed in it. According to an urban legend Oiwa is buried at a temple called Myogyo-ji in Tokyo, and it is a tradition for the actors and the director to make a pilgrimage to this temple to ask for her blessing.

I've searched for the meaning of the name Oiwa and have come up with nothing except that it's used as a surname. Everyone thinks I'm looking for the meaning behind Iowa and, well, no. Oiwa is not a household name in America, so the connection to the play isn't something that everyone is going to be familiar with. I'm not sure how this name would play out in Japan, however.

So if you want an unusual and creepy name, Oiwa could work for you.