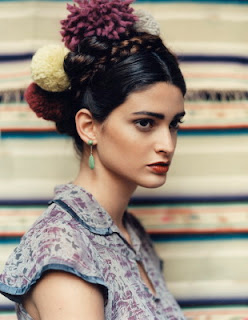 Continuing with my names that are vaguely inspired by Christmas, sugar plums seem to come up a lot during the holidays. There's the Sugar Plum Fairy and the visions of sugar plums that are supposed to dance through our heads. And yet, I've never actually seen or tasted a sugar plum, which made me curious.

Today, you might see "sugar plum" candy in stores that are literally plum-flavored and plum-shaped. However, real sugar plums are a traditional holiday treat back from the days where there were no candy shops. They're not necessarily made from plums; at one time "plums" was a term used for any dried fruit. The candy was made by combining chopped prunes, cherries, apricots, figs, or dates with almonds, honey, or spices. The mixture was then rolled together in a ball and coated with sugar or coconut.

The country that produces the most plums is China, followed by Romania, but plums can grow wherever there's enough rainfall for them. If the climate is too dry, the fruit never grows past it's bud stage. Plums and prunes taste sweet and tart, and are known to be good for digestion. Plums are used to make a variety of different alcoholic beverages. Wiccans can use plum wood for wands, and make plum tea and pudding. This fruit is particularly popular in Asia, where they are dried, pickled, or made into wine. In early spring, the trees blossom with beautiful mei flowers, which is the official national floral emblems of the Republic of China.

Plum is also a color name. It describes a deep purple, and while the damson plum does indeed have striking indigo skin, other species come in red, green, and yellow. The color purple symbolizes spirituality, wisdom, and knowledge. I've notices that when a witch costume in a store isn't black, it's plum. I don't really know why.

Despite some familiarity, this name is rare in the United States. It's more common as a surname from what I can tell, and until a while ago the only Plum I knew was the professor. However, I've actually seen this name pop up a lot on birth announcements from Great Britain recently. This might be due to Plum Sykes, an English writer and socialite.

It's a lovely, quirky, feminine name that sounds like it belongs to a bookish girl to me. And most people won't immediately catch that it's the name of a famous ballet-dancing fairy.