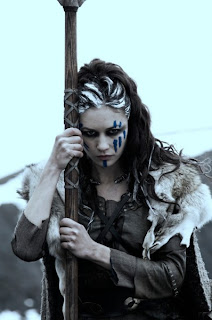 To those who celebrate it, Happy Saint Patrick's Day! Although the holiday doesn't mean much to me anymore, it's an appropriate time to profile this Irish beauty.

Maeve (pronounced "MAYV," but I've also heard "MAY-vee") is derived from the Irish Gaelic name Medbh, meaning "she who intoxicates." And yes, this is where the word "mead" comes from. This moniker is very important to Irish legend. This name is well known for being worn by a powerful Pagan warrior queen.

Queen Maeve, or Queen Medb, is one of the main protagonists in the Irish epic Tain Bo Cuailnge ("The Cattle Raid of Cooley"). Her status as the ruler of Connacht was achieved through various marriages, love affairs, assassinations, and battles. Her most prominent husband was Aillil mac Mata, but her enemy was her ex, Conchobar mac Nessa. Maeve had one daughter named Findabair and seven sons named Maine. The sons originally had different names, but when she asked a Druid which one of her sons would slay her enemy he replied "Maine." So she renamed all her sons, shoving their first names into the middle slot. The prophecy came true, kind of. One of her sons killed a different guy named Conchobar. Maeve's personality is described as "stubborn and scornful."

That's all her back story, now let's get to what the epic is actually about. Maeve insisted that she should have the same amount of wealth as her husband the King. When she found out that her husband had one more bull than she did, this was a problem. She sought to rectify this and found a bull that was to her liking. There was just one problem: the bull was already owned by a vassal of her ex's. She sends messengers to negotiate the sale of the bull and it worked at first. But then the messengers drunkenly admit that if they hadn't come to an agreement they would have taken the bull by force anyway, and the vassal cools on the deal immediately. No bull for Maeve. So she starts a war. She fights against the hero Cuchulainn several times and even offers marrying her daughter off to any man who defeats him. This is a lot of trouble over a cow. Stubborn and scornful, indeed.

Occasionally, Queen Maeve is described as a goddess. This has never been proven, but some historians seem to believe this to be the case. One theory states that she is connected to the sovereignty goddess Medb Lethderg, with whom kings would ritually marry as part of their inauguration ceremony. This character is also closely associated with Queen Mab, the ruler of the faeries mentioned in Shakespeare's Romeo and Juliet.

Maeve is something of a new favorite in America. It peaked in 2010 ranking at #536. In 2008 it ranked #89 in Ireland and #329 in Scotland. I suppose the sizable percentage of Americans with Irish heritage are looking for names that honor that past without using the endless Marys, Ellens, and Noras that our family trees are actually filled with. However, the more superstitious amongst us will say that a daughter named Maeve will be a tough teenager to handle.

I think that Maeve's a great choice. As it is currently outside of the top 500, it's just within my comfort zone in terms of uniqueness. It's relatively easy to say, as far as Irish names go. And it's got a badass Pagan queen attached to it. So I think it's perfect for those in the Witchy subculture.