Spirit Animal Round Up: Horse 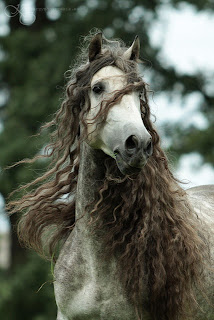 Maybe it's because I saw Warhorse recently (the play, not the movie), but I'm in the mood for some horse names.

Unlike snakes and owls, horses have always been universally well liked. Originally only indigenous to Europe and Asia, horse worship has been around since the Bronze Age. White horses were particularly prized due to how rare they were and they were used for divination. In Asian culture, the horse is one of the animals represented in the Chinese zodiac. When White men brought this animal into the America's they were almost instantly embraced by Native American culture. The horse has long been associated with stamina, power, and freedom.

I tried to stay away from unicorns and winged horses for this one because that's a whole other post. I'm sure there's a lot more options than what is listed here:

1. Philip/Phillipa/Felipe/etc. Probably the most classic option on this list. It comes from the Greek name Phillippos meaning "friend of horses."

2. Rosalind. People think that this one has something to do with roses. No, no, no. It comes from the Germanic elements hros ("horse") and linde ("soft" or "tender").

3. Epona/Eponine/Eponina. The name of the Roman/Gaulish goddess of horses, ponies, mules, and donkeys. There is also a Les Miserable connection.

4. Lorimer. An Old French word that used to refer to someone who made stirrups and other metal tools used for harnesses. Hey, it's horse related.

5. Vanner. A breed also known as the Gypsy horse because the Romanichal people of the British Isles developed it. They have a very distinctive look and they were meant to pull vardos (the wagons that Gypsies traditionally live in).

7. Colt. It took me an embarrassingly long time for me to remember this one, but Colt is a popular option nowadays. It's the term used for a young, male horse. There's also a gun connection.

8. Balius. Possibly means "dappled." An immortal horse from Greek mythology who's parents were Zephyr and a harpy named Podarge.

10. Canter. A type of gait faster than a trot but slower than a gallop.

11. Stallion. The term used for a male horse that has not been castrated. Brings Sylvester Stallone to mind.

12. Rhiannon. A mythic figure very much associated with horses.

13. Demeter. The Greek goddess of the harvest originally took the form of a mare, along with Poseidon.