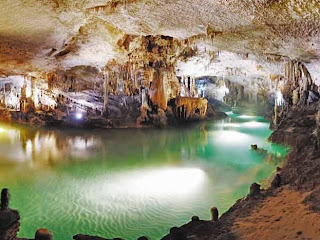 Happy Earth Day, everybody! Let's celebrate by cataloguing some names inspired by our earth's many treasures.

There technically isn't an official "Seven Wonders of the Natural World" list that everyone agrees on. There's just so many beautiful places. But I managed to pick a few interesting names:

1. Paria. America has the famous Grand Canyon, but it's little sister the Paria Canyon has equally beautiful rock formations.

2. Verdon. Verdon Gorge in France is considered to be the most beautiful river canyon in Europe. The formation of this gorge can be traced to the Jurassic era, when it was covered by a warm shallow sea and covered in coral. Because it is so close to the French Riviera it is a popular destination for tourists.

3. Nakuru. If you watch a lot of wildlife documentaries you've probably seen Lake Nakuru, Kenya. It's the one with all the flamingos, amongst many other animals. Nakuru is Maasai for "dusty place."

4. Siwa. The Siwa Oasis in Egypt's main claim to fame is that it was the home of an oracle temple to the Ancient Egyptian god Amun.  Alexander the Great once reached that temple and the oracles confirmed that he was divine and a rightful Pharaoh of Egypt. The Oasis is a vast and extremely isolated settlement. The name Siwa is of unknown origin.

5. Reef. The Great Barrier Reef located off the coast of Queensland, Australia. It is the world's largest structure made out of living organisms and supports many endangered species.

6. Shilin. The Shilin Stone Forest of China is very striking, with tall rock formations that stand straight up as if they were trees themselves. There is a local legend saying that the forest was created when a young lady was forbidden to marry her love and turned into stone.

7. Everest. Thought I would never get to this one, did you? Mount Everest is the world's highest mountain and it's located in the Himalayas. Named after Sir George Everest by the English, the Tibetans have called it Chomolungma ("Holy Mother") for centuries.

8. Victoria. Victoria Falls, named after Queen Victoria, is at the border of Zimbabwe and Zambia. While it's not the tallest or the longest waterfall, it does have the largest sheet of falling water. It's known in Africa by the name Mosi-oa-Tunya, meaning "the smoke that thunders."

9. Aurora. An Aurora is a featureless, colorful glow in the skies of the Artic and Antarctic regions. They are caused by a collision of charged particles. The Cree Native Americans called this the "Dance of the Spirits" and Medieval Europeans thought it to be a sign of god. The ones in the northern hemisphere are called aurora borealis, and in the south they're called aurora australis. Aurora is the Roman goddess of the dawn.

10. Komodo. Komodo Island is unique for it's beaches with pink sand and the unusual animals that roam it. And yes, this is the same island with the komodo dragons.

11. Amazon. As in the Amazon Rainforest which contains more than half of the remaining rainforest in the world. It was named after the mythical female warriors due to a war that a conquistador fought with the Native tribes. He noticed that the women fought alongside the men, which was common practice amongst the tribe but unusual for an invading Spaniard.

12. Baikal. Thought to be the world's oldest lake, Lake Baikal in Siberia contains roughly 20% of the world's unfrozen fresh water. There are even reports of a "Baikal Monster" much like the Lock Ness Monster, but it is more likely that it is a large sturgeon. It's name is derived from the Mongolian baygal nuur, meaning "nature lake."

13. Jieta. Jieta Grotto in Lebanon has vivid painterly colors, an underground river, and chambers stretching for miles. It's other claim to fame is that it has the largest stalactite in the world. This underground cave was inhabited by prehistoric humans. Jieta means "roaring water" in Aramaic.