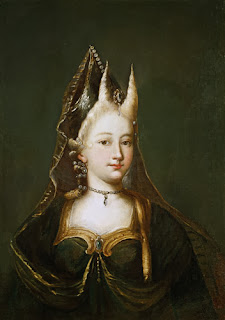 Samhain is coming up so I should probably have some fun with some darker names. Bathory is one such offering.

Bathory (pronounced "BATH-ohr-ee," at least America) is the name of a Hungarian noble family (side note: usually there is a little accent mark over the "a" in this name, but I still can't seem to figure out how to type stuff like that). They are very important to the history of that region, particularly during the late Middle Ages. Several Princes of Hungary and one King of Poland were Bathorys.

The family first emerged during the 1200s. King Ladislaus IV gave several men (who happened to be all related) an estate called Bator in order to honor them for military service. Eventually one man, Briccius, became the soul owner of the property and all of his decedents were given the name Bathory, meaning "of Bator."

The Bathorys are apparently so important that they have their own legend describing how they got their name. The story goes that there was once a warrior named Vitus who slayed a dragon that was terrorizing the local townspeople. The grateful citizens honored him by giving him the name Bathory, which supposedly means "good hero." It doesn't in real life. But the word the name came from, Bator, is Hungarian for "brave" or "valiant" so that's kind of true if you squint hard enough.

Now that that's out of the way, let's get to the Bathory family's most infamous member: Countess Erzsebet "Elizabeth" Bathory de Ecsed. One of her nicknames is "Countess Dracula" and she is labeled to be the most prolific female serial killer in history. The legend states that she tortured and killed 650 adolescent girls (a number which, as far as I can tell, was plucked from the ether since estimations vary greatly) in the belief that bathing in their blood would reverse aging. She also took pleasure in beating them, biting off chunks of their flesh, freezing them to death, and mutilating their hands. Bathory was never tried or convicted, supposedly because of her rank. But she was punished. She was locked in a tower until she died.

The story is so unbelievably horrific. It is so unbelievably horrific that some historians that you shouldn't believe it. There was no fair trial or hard evidence that any of this happened. There weren't even any bodies examined. She was a highly educated widow with a very valuable estate. It was rumored that she was a lesbian. To top it all off, the local king owed her a fortune of money that he could not repay. Is it so hard to believe that the whole story's a product of mass hysteria and greed? And the whole bathing in blood thing? Never actually mentioned in any of the witness testimonies at the time. That was tacked on to the story afterwards. Being a Wiccan means that I read a lot of stories about unfairly demonized women, so naturally I'm very skeptical of the Bathory folklore.

Yet many historians still push the "Countess Dracula" image (I guess because it makes a good story) and as a result Bathory has never been a common given name in the United States. In a vacuum, Bathory is a fashionable sounding choice. Kind of like Romilly or Bellamy. This is a name that I can see appealing to very gothic types. It is also worth mentioning in passing that Bathory is the name of a rock band.

I can't imagine this name being attractive to many people, but I've seen dark names used on little ones before. So if you run a little bit on the dark side and you don't care what anyone else thinks, Bathory might be for you.