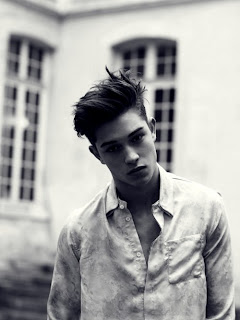 I love Sirius Black. I bawled when he died in the Harry Potter books. So I also few in love with his name and it's definitely in the running for a future son.

Sirius Black III was the escaped prisoner of Azkaban in Harry Potter and the Prisoner of Azkaban. Sirius disagreed with his family's belief in blood purity, and broke tradition when he was sent to the Gryffindor house instead of Slytherin. He was best friends with James Potter, Peter Pettigrew, and Remus Lupin at Hogwarts. While a student, he and his friends became unregistered Animagi so they could keep Remus company while he was in his werewolf form. The animal he changes into is a large, black dog. James is so close to Sirius that he makes him Harry's godfather. After being wrongfully convicted of giving up the location of Harry's parents to Voldemort and for the murder of twelve muggles (crimes actually committed by Peter Pettigrew), he was sent to prison.

After seeing Peter Pettigrew in his rat form in the newspaper, he became filled with the need for revenge. He managed to escape. Sirius knew that Pettigrew was in Hogwarts, and he hung around the Forbidden Forest and Hogsmeade while trying to figure out how to get in. He was often mistaken for a Grim, an omen of bad luck. At the end of the Prisoner of Azkaban, a confrontation in the Shrieking Shack reveals Pettigrew for who he is to Harry, Ron, and Hermione. Afterwards, Sirius asks Harry if he would like to live with him, and Harry says yes. However, Sirius is still guilty in the eyes of the law, and he must go into hiding again. He eventually becomes a member of the Order of the Phoenix, and is killed by his cousin Bellatrix in a battle.

Sirius (pronounced either "SIR-ee-us" or "SEER-ee-us") is a Latin name derived from the Greek seirios, meaning "burning," "scorching," or "glowing." This makes Sirius a great fire name as well as a celestial one. Sirius is another name for what is known as the Dog Star because it is a part of the Canis Major constellation. It is the brightest star in the night sky.

In Ancient Egyptian culture, the rising of Sirius marked the first day of the flooding of the Nile. Their whole calender was based on this celestial event. They also believed that this star caused arousal in women. For the Greeks, this star signaled the start of the "dog days" of summer. The inhabitants of Ceos would offer sacrifices to Sirius and Zeus so that they may bring cool breezes to the island. The Romans celebrated the setting of Sirius by sacrificing a dog, incense, wine, and a sheep to the goddess Robigo.

Meanwhile, on the other side of the world, the appearance of Sirius marked the beginning of winter to the Polynesians. For them, Sirius was a part of the Great Bird constellation called Manu. It's appearance during the Winter Solstice was celebrated by the Hawaiians, only they called the star Ka'ulua, meaning "Queen of Heaven." The Dog Star was an important tool for navigation in the Pacific Ocean.

For whatever reason, Sirius has never been a popular name in America. It is also the name of a satellite radio company, but that doesn't strike me as a reason to avoid it. I think that it's pronunciation might be holding it back. It sounds like "serious." That makes it slightly awkward when pairing it with other names.

If you really love Sirius, there's no reason not to try to make it work. The only well known namesake is the Harry Potter character, so everyone will recognize the name because of that. And the character is a great association.