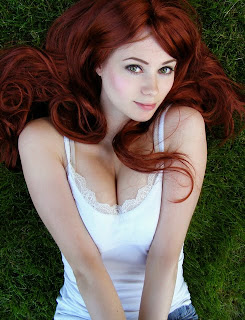 You might tell me that you don't know anyone named Maewyn, but you do. Only you know him better as Saint Patrick. Historians believe that Saint Patrick's given name was Maewyn Succat.

Maewyn (pronounced "MAY-win") is believed to have been born in Wales or England. His father was a Roman Briton named Calpurnius. There is no information regarding his mother, but I have to wonder since Maewyn is definitely not a Latin name. It's most likely Welsh, although no one seems sure of that at all. Because of that, the meaning is hard to come by. And Succat is the name of a Jewish festival, which also seems odd to me.

Anyways, young Maewyn had an ordinary childhood until the age of sixteen, when he was kidnapped by Irish marauders and sold to a Druid chieftain as a slave. Well, that explains why he didn't like Pagans so much. For six years he worked for the High Priest as a sheperd. During this time he began to have vivid dreams and visions, one of which showed him the means to escape.

He left and walked 200 miles eventually finding a ship sailing to France. He somehow found a ministry in St. Germain, where he quickly moved up the ranks to become a Priest. He wanted to go back to Ireland to "cleanse" the land, so to speak. But before he left the bishop gave him the name Patritius. The rest, as they say, is history.

Even though Maewyn was traditionally a boy's name, today's naming trends would dictate that it's feminine. It looks like many names that have been used for girls, like Maeve and Bronwyn. But at the same time, I have to wonder about the name's resemblance to Merlin. Could the two names be related somehow? Probably not, as Merlin's original name was Myrddin, but still. I wonder.

I would think that Maewyn would really appeal to today's parents. Win and Winnie, the latter being one that I keep hearing more and more these days, would work well as potential nicknames. If you genuinely like Saint Patrick's day and want to honor it with something a little more creative than Patrick, then Maewyn might be something to consider.