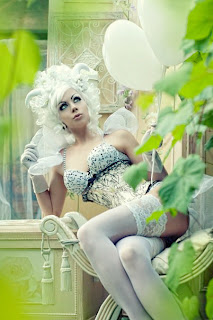 Ah, absinthe. The preferred herb based, highly alcoholic drink of the bohemians of Paris. It has a bad reputation, but is it deserved?

Absinthe was supposedly invented in Switzerland, but there is evidence that versions of this drink have existed since Ancient Egypt. It became popular in France during the 1800s and 1900s. It was particularly well enjoyed by artists and writers like Oscar Wilde, Henri Toulouse-Lautrec, Vincent Van Gogh, Charles Baudelaire, and famous Occultist Aleister Crowley. Anyone who's seen the film Moulin Rouge knows that this beverage's nickname is "the green fairy." Absinthe has also been portrayed as a dangerously addictive psychedelic drug, but it's effects are exaggerated. In reality, it's no worse than any other alcoholic drink.

There are some conflicting explanations for the etymology of the infamous green drink. Absinthe (pronounced "AB-sinth" or "AB-santh") is derived from the Latin absinthium, an old name for "wormwood," also known as Artemisia. The flowers and leaves of wormwood are used to make absinthe, in combination with sweet fennel and green anise. An in the olden days when they gave their children medicine containing wormwood they would smear honey on the brim of the cup to make it drinkable.

Speaking of which, others claim that absinthe means "undrinkable" in Greek. It may also be linked to the Persian spand or aspand. Because wormwood was commonly burned as a protective offering, it could also be related to the Proto-Indo-European spend, meaning "to perform a ritual."

But what about Absinthe as a name? Originally, I categorized this as a controversial name, but maybe only because part of me wishes that it would be. It's probably on the same level as Chardonnay, a name associated with wine. Sure, Absinthe is more sophisticated than Tequila or Budweiser, but it's still an alcoholic drink. It's not the best association.

But I'm sure this name will appeal to some people, it's daring and has feeling of bohemian debauchery. If you want to chance it, alternate spellings include Absinth, Absynthe, and Absenta. It's a macabre name that would take a specific type of macabre person to wear it.