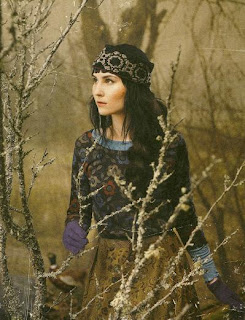 I know what most people think when they here this word. This seems like a name that is meant to be spooky. I suppose that it could be in reference to a ghost, but that's not really what I'm talking about here.

Spirit is derived from the Old French espirit, which is in turn derived from the Latin spiritus, meaning "breath," "soul," or "courage." It is often used in Christian contexts, there is of course the Holy Spirit, but the idea doesn't belong only to them. The use of the word in reference to a supernatural being started sometime in the 1300s.

For Neo-Pagans, Spirit (also known as Ether or Aether) is one of the five elements. It is symbolized by the top point of the pentagram, because it's the most important, and by the colors purple and white. Spirit is the source of the other four elements, uniting all things and giving the world meaning. Spirit is the most commonly called-upon element when performing magick, whether we mean to or not.

Occasionally you might see an upside-down pentagram. This inverted symbol is most closely associated with Satanism. It symbolizes that the wearer does not care about the spirit element at all, but is only concerned with earthly pleasures. Personally, I find the inverted pentagram quite offensive.

Of course, another way this word is used is in reference to the afterlife, or to supernatural beings we don't fully understand. But most Neo-Pagans don't find these things threatening, although we are very respectful of these being's power. Both Native American religions and Shintoism tell us that there is a spirit for everything. Those that have watched Spirited Away know that there is even a spirit for radishes, and he is very nice. Many Neo-Pagans have spirit guides, which may or may not take the form of an animal. In this Pagan group I socialize with, a Wiccan who was a psychiatrist was observing the symptoms of this woman who barged into her office who she thought was a patient. When she asked for her name, she said "I'm Angel," and disappeared. "So my spirit guide is bipolar," she told us. "That explains a lot, actually."

I have tags for fire, water, earth, and air names, but how would you even begin to categorize a spirit name? Names with ghostly meaning seem too literal, and there's not many monikers like that anyways. But if spirit is in everything, a spirit name could technically be anything.

Spirit could be an interesting choice for a name. If Spirit doesn't strike your fancy but you like the idea of it, you could consider Espiridion or Spiridion, Spanish and Greek for "little spirit." And I might have to do a round up of "spirit" names so people know other options. But for now, this is a name for those that want religions overtones plainly visible.

Image Credit:
http://blessedwildapplegirl.tumblr.com/
Posted by Isadora Vega at 11:42 AM