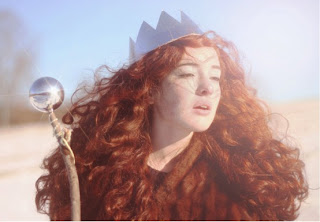 In case you were wondering, yes I did finally finish the first Hunger Games book.

A little while back another name website made a list of names from the Hunger Games that said that Glimmer and Gloss weren't usable. Uh...why not? Granted, Glimmer isn't a very nice character and she doesn't last very long (no, I don't consider that a spoiler). But neither is Clove and that name quickly became a darling on name websites. I actually think that Glimmer would fit in wonderfully into today's namescape.

The meaning of Glimmer is a positive one. It comes from the Proto Germanic glim, meaning "brightness." The word got a bit more specific as time went on, now it means "to shine dimly." People associate light with goodness, so that adds to the name's appeal.

Names that end in "-er" are increasingly being used for both genders. Think Harper, Archer, Hunter, and Piper. So Glimmer fits in in that way as well. Glimmer reads more girly to me personally, but I see no practical reason why it can't be used for boys as well.

I don't think the usual problem with fictional namesakes is going to happen with Glimmer. While Suzanne Collins did essentially invent this name, I don't think the character makes much an impression. She's only shown a few times and we don't really know anything about her except that she was very attractive. Unless they mention her again in the other books, I don't know. I'm trying to be good and not google the remaining two books in order to not spoil it for myself.

If the name was Glitter I could see it being seen as slightly ridiculous and a little too cute. But Glimmer? Totally usable. In fact, it might become one of my favorites.