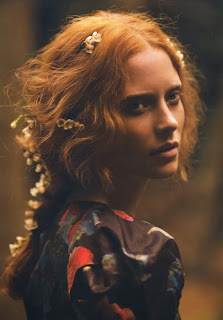 Thanks to AWdM for requesting Lyra.

Lyra is a Greek name meaning "harp." It seems like there is some debate over the pronunciation, but all official sources I've found say "LIY-rah." Lyre is the masculine version and that sounds like "liar," so there you go.

Lyre is the name of arguably the most famous ancient musical instrument, the predecessor of the harp. In Greek mythology it is strongly associated with the myth of Orpheus. This is the same guy that botched his attempt at getting his wife Eurydice back from the dead. After Orpheus was killed, his lyre was thrown into the river. Zeus sent his pet eagle to retrieve it. The eagle and the harp were both turned into a constellation.

Different cultures interpreted Lyra differently. In Wales, the constellation is known as King Arthur's Harp or King David's Harp. The Persian poet Hafiz referred to it as the Lyre of Zurah. Vega is Lyra's most notable star, so it's not surprising that this constellation is also associated with eagles and vultures. The Incas called this constellation Urcuchillay, who is a multicolored llama deity who watched over animals. For you Christians, this constellation has been called Praesepe Salvatoris, or the Manger of the Infant Savior.

But most people love this name because of His Dark Materials. Lyra Belacqua is the protagonist of the celebrated trilogy written Phillip Pullman. I've never read it, but I've heard that the trilogy could be read as Pagan friendly and/or Atheist (which is why it's gotten some controversy). It includes witches, different dimensions, polar bears in suits of armor, and spirit animal-like beings called daemons.

This name has been getting some attention from name enthusiasts but has never been a common name in the United States (although I hear it's fairly well used in England and Wales). The pronunciation of the boy's name Lyre is problematic, but Lyra doesn't have that same issue. It's one of those "why not?" names. Why isn't this as popular as Luna? I don't know.

I like Lyra a lot. It's very wearable for a little witchlet. Or any girl for that matter.