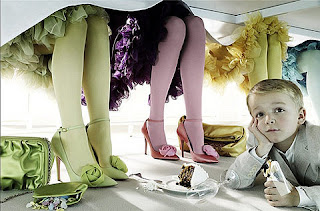 Ah, the naked, mischievous, and slightly perverted icon of Valentine's Day. People have grown to love this Roman god of lust and love. But would it work as a name?

Cupid (pronounced "KYOO-pid") is derived from the Latin cupido meaning "desire." He is the son of the gods Venus and Mars. He's either depicted as an adult or as a very young child. He's very often nude, although in more recent portraits he's shown wearing a diaper in his child form. No matter what, he always has wings and carries a bow and arrow. Anyone struck by Cupid's arrow will fall in love with the first person they see. He is the Roman counterpart of the Greek god Eros.

When I saw the play Metamorphosis by Mary Zimmerman, Cupid was portrayed as being blindfolded. This is a historically accurate depiction. Cupid isn't actually blind, it's just a symbol for true love. Love isn't based on anything we can see, and once we fall in love we become irrational and compulsive.

The most famous story involving Cupid is the tale of Cupid and Psyche. Psyche was a mortal woman who many admirers claimed was more beautiful than Venus. Venus was enraged and ordered Cupid to destroy her. Once he saw her, though, he fell instantly and hopelessly in love with her. Cupid arranged for Psyche to come and live in his home. Their love grew, but Cupid would not allow Psyche to see what he looked like. Psyche's sisters were jealous of her happiness, so they convinced her to follow him to his chambers at night.

After Cupid awoke to find her watching him, he left her because he couldn't trust her anymore. Heartbroken, Psyche went to Venus for help. Venus found this hilarious. She made Psyche perform a series of impossible tasks. Psyche was assisted by the gods, so she completed each task with their help. Eventually, Cupid couldn't bear the thought of one more day without Psyche, and forgave her. Reunited at last, Cupid gave Psyche a potion that would make her immortal. They finally married and conceived their daughter, Veluptas.

While in the course of writing this post, I really wasn't not sure why this name doesn't appear in many conventional baby name sources. I mean, asside from the obvious, "The association is too much." Was that really all there was to it? Because I thought Adonis would be too much as well, and judging from the popularity charts, people have no problem with the namesake. So why not Cupid? The Valentine's Day thing couldn't be the only reason. And then suddenly it dawned on me. Duh! He has wings! Cupid looks like an angel! And with the exception of possibly Seraphim (although that one seems to be diminishing too) some parents aren't comfortable giving names with angelic meanings to boys.

That's why I'm thinking that if a modern parent considers this name at all, they might consider it more for a daughter. I personally love Cupid on a boy. But on someone else's boy.